Great Books of Pleasanton Discusses Works that 'Bite and Sting' 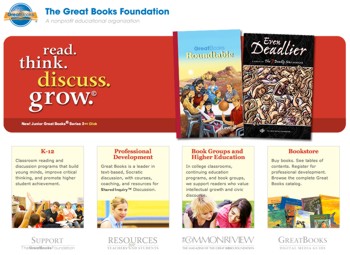 Reading is a solitary activity, which has to be one of the reasons why book clubs are so appealing. The main attraction, as avid reader Brian Mahoney puts it, is that in shared conversation "you enter into a larger book than the one you read alone."

Mahoney is the long-time facilitator of Great Books of Pleasanton, one of about 40 local discussion groups in northern California associated with the Great Books Council of San Francisco. The Council, in turn, is an offshoot of the Great Books Foundation, which was established after World War II by Robert Maynard Hutchins, chancellor of the University of Chicago, and Mortimer Adler, the noted philosopher and educator.

The Great Books mission is to promote the discussion of great literature, "the books that bite and sting," according to the San Francisco Council website. Clear-cut guidelines, laid out in a set of rules called The Method of Shared Inquiry, assure that participants focus specifically on the texts and not extraneous matter, Mahoney explains.

"First, one has to have read the selection at least once," he continues. "Most of us will read a selection two or three times before we feel confident to discuss the contents. Second, the participants have to substantiate their responses with the text. Third, no outside sources are allowed. We are not didactic, we do not teach; we discuss. Fourth, the leader acts as a facilitator; therefore, cannot enter into the discussion. This also means that the leader cannot ask a leading question that moves the participants to his or her way of thinking."

The Pleasanton group was founded in 1969. "Our size has varied over the years and now we are a wee group, but the quality of our members discussing books is extraordinary," Mahoney comments. The readings themselves are chosen by group consensus from selections offered by the Foundation, typically assembled in themed anthologies. "The best thing about Great Books," observes Mahoney, "is that it forces the participants to read things that they normally would not pick up on their own."

Recent readings have ranged from Machiavelli's political treatise, "The Prince," to the Stephen Crane short story, "The Open Boat." Next up will be selections from the Foundation anthology "Even Deadlier," a sequel to "The Seven Deadly Sins Sampler," described by the Council as short fiction that allows "readers to peer into the hidden recesses of sinful thought and behavior"-undoubtedly good conversational fodder. "We judge a book to be a good read if it can sustain a two hour discussion," Mahoney says.

Great Books of Pleasanton meets on the fourth Monday of every month (except December) at Towne Center Books, 555 Main St. For information about the local group, call Sadie Skinner at (925) 846-1658. To learn more about the Foundation, visit www.greatbooks.com .