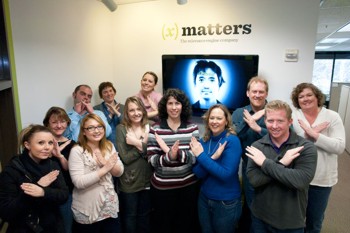 X truly does mark the spot at the Hacienda offices of xMatters.

xMatters CEO Troy McAlpin has the perfect anecdote to illustrate the benefits of the company's software products.

Last June he traveled to the U.K. to announce the corporate name change from AlarmPoint Systems to xMatters. On his return trip, arriving in New York from London, he received a voice mail telling him that his connecting flight to San Francisco had been canceled. It was nice to have the heads-up, but without any supporting information about his options, the message was of little use.

"Seriously, is that of any help?" he writes in his blog. "I have a daughter's birthday I'm rushing home to and all I know is, 'my flight is canceled and thank you.'"

Had the airline been using xMatters' relevance engine, its mass personalization capability would have offered up several alternatives, even connecting him to an agent, to resolve the problem. Instead, he had to stand in line for 90 minutes to rebook a ticket.

While even a few years ago the airlines' mass notification might have been considered a major step forward, today's technology has leapfrogged far beyond that capability. The latest advance is all about what xMatters calls "mass personalization."

As McAlpin puts it, the company is "growing its products from alert management applications into engines that help you deliver what matters to your customers." The "what matters" will, of course, vary from business to business. The "x" factor can range from an airline automating the offer of rebooking assistance to coupons sent to shoppers' cell phones in the vicinity of a retail store - and a host of scenarios in between.

The enabling technology is xMatters' relevance engine, "a capability that can be added to any product or service, including existing applications and technologies to connect people with relevant information, notifications, choices, and actions at exactly the right moment," McAlpin explains. "Relevance engines selectively deliver what matters to the appropriate people and give them the ability to take immediate action, helping businesses function more quickly, accurately, and intelligently." Especially in mission-critical environments like IT or infrastructure operations, xMatters' offerings represent an invaluable business continuity tool.

Founded in Pleasanton in 2000 as AlarmPoint Systems, the company moved into offices at 4457 Willow Road in July 2007. In addition to its Hacienda office, it has European operations in Woking, U.K., and an Asia-Pacific base in Sydney, Australia.

Currently, more than 900 customers worldwide rely on xMatters to send "relevant, targeted, critically important communications" to thousands of people each day. Compatible channels include phone calls, email, SMS, and paging - and now, the Apple iPhone and other iOS devices, thanks to the new Apple iPhone app, which was just launched last month.