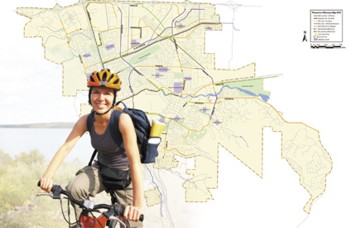 Whether soaring gas prices, the advent of warm weather, or the urge to exercise have prompted you to get out your bicycle, you will want a copy of the Pleasanton Bikeways Map, the new city-produced resource bound to make your excursions safer and more enjoyable.

This handy document lays out the existing network of facilities for non-motorized travel, including paved and unpaved trails and on-street bike lands and bike routes.

Equally useful is the wealth of bike-related information on the reverse side of the map. One series of photographs illustrates the various bikeway types. Another demonstrates the most effective ways to park a bike to prevent theft. A third group shows how to trigger a traffic signal. A diagram with detailed commentary instructs cyclists on how to fit and wear a helmet.

The guide also includes highlights of relevant provisions of the California Vehicle Code (CVC), which serve as a good refresher course on the rules of the road. Riders are reminded that they are not allowed to wear earplugs or a headset that covers both ears, nor may they carry packages that prevent them from keeping at least one hand on the handlebars. The summary also details the four different kinds of lights and reflectors required when riding at night.

An FAQ section provides contact details for questions like how to find out street sweeping schedules, where to report potholes, and how to take a bike on Wheels buses. It also references a recent change to the CVC that allows bicyclists to ride in crosswalks. This new right comes with a caveat, however: cyclists must first come to a complete stop and may not enter the crosswalk until it is safe to do so.

The Bikeways Map is an outgrowth of the city's Pedestrian and Bicycle Master Plan, which was completed in 2010 with the assistance of outside consultants and the city's Bicycle and Pedestrian Advisory Committee. The process included three public workshops to gather feedback on residents' priorities. "The issues raised were pretty well expected," notes Janis Stephen, a traffic engineer with the city. "People wanted better connections to other cities, and more bike lanes and trails in general. They also asked for this map."

The Master Plan reflects the community input and the city's recognition of the important role of walking and bicycling, whether "for recreation, fitness, or as a means of transportation." While many segments of the city-wide non-motorized transit network are still on the drawing board, awaiting funding and the resolution of other considerations, Pleasanton is committed to a healthy, multi-faceted, sustainable transportation network.

"The quality of the infrastructure for bicycling and walking contributes to the overall quality of life in the city by encouraging active living and by reducing automobile traffic, with its associated noise, pollution, congestion, and global environmental impact," reads the plan's Vision Statement. The Bikeways Map represents another step toward this goal.

Copies of the map and guide are available at the Hacienda office; call (925) 734-6500, stop by at 4473 Willow Road, Suite 105, or post an order request to material@hacienda.org . You can also view the map at www.ci.pleasanton.ca.us/pdf/traffic/bikeways-map.pdf . The City of Pleasanton Pedestrian and Bicycle Master Plan is at www.ci.pleasanton.ca.us/pdf/pedbike-final-2010.pdf .