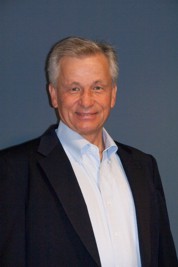 Ron Bissinger has surveyed the universe from three cardinal dimensions: down, out, and in. In the energy business he was always concerned with what lay miles down below the earth's crust. An amateur astronomer, he looked out beyond our solar system to discover an unknown extrasolar planet. Now, as the CEO of a newly founded life sciences imaging company, his attention is focused inward, on the building blocks of the human body.

Two of the three vantage points converge in his current post. Aplegen recently acquired the Santa Barbara Instrument Group (SBIG), which has a 20 year history making very high-end scientific digital cameras, primarily in the astronomy arena. Blending SBIG's core technology into its own portfolio to create new products for the biotech market, Aplegen will deploy new advanced imaging instruments and software to public and private labs engaged in human genome research all around the world.

Although Bissinger's original introduction to SBIG was a fortuitous encounter, it is no accident that these two businesses ultimately joined forces.

For Bissinger, the journey started during childhood. He grew up in Hawthorne, New York, a hamlet in Westchester County where everyone knew each other. "The town had a population of 1,500, and I was in a high school class of 60," he recalls. Around age seven or eight his fascination with star-gazing emerged. As he learned more about science and astronomy he started building his own telescopes.

An enterprising youngster, he got his first part-time job in junior high. He lists the progression: shining shoes, delivering papers, mowing lawns, shoveling snow. His last job before college was clerking at the local grocery store. Working was "not terribly financially driven, but my parents made it clear that if I wanted spending money I had to earn it," he relates. "I was also able to save a good chunk for college."

An industrious student, Bissinger "managed to get a couple of scholarships" and headed off to Clarkson University. He considered majoring in astronomy, but the prospect of a more pragmatic career prevailed, and he became a chemical engineer. A National Science Foundation scholarship bought him to U.C. Berkeley for his masters degree. He then went to work in the energy industry, first for Union Oil, then for Exxon, moving from southern California to Houston to Denver. An MBA, earned while he was full-time on the job, equipped him for the mergers and acquisitions side of the business.

A few years later, in the mid-1980s, the oil industry went through a severe downturn, and many people lost their jobs. "My choice was either relocate to Houston in an industry I didn't see recovering for 20 years, or do something different," he recalls.

An instinct for opportunity told him it was the right time to shift focus. He returned to the high-tech mecca of the Bay Area, went to work for Siemens, and spent the next 15 years in the semiconductor industry.

Meanwhile, the astronomy world was heating up, thanks in part to the advent of computerized imaging equipment. In the mid-1990s a team of professionals in Europe detected the first exoplanet. In the early 2000s came the discovery of several exoplanets that passed between Earth and their stars, causing the star to "wink out" briefly. Bissinger read about these developments and said, "Boy, I'd love to see that." On the Internet he found an astronomer at NASA Ames in Mountain View and affiliated with a team at U.C. Santa Cruz to search for additional exoplanets.

In 2005 he became "the first human to actually detect a certain planet around a star. It was really cool. Even though I wasn't able to be a professional astronomer, I was able to contribute to science." The planet has been formally named XO-1b. "It rolls right off your tongue," Bissinger laughs. "Now there are so many of them, but in 2005 they were just finding the first batches."

Contrary to popular belief, Bissinger's observations were conducted not from a far-away mountaintop but from his own backyard. "You really don't need to be remote to do these things if you know where to look and have the right equipment."

The equipment connection is what led to SBIG, but business-wise there were a few intervening ventures.

In 2005 Bissinger was at another professional crossroads. He contemplated retirement but decided he was not ready. Wanting to do something different after energy and semiconductors, he started consulting for several life science companies. One of his clients, the public traded Alpha Innotech Corp., had "some challenges." He joined the company, becoming CEO within six months. Over the next three years he built a solid team that helped him engineer a turnaround. Their efforts culminated in Alpha Innotech's successful sale in late 2009.

Bissinger once again found himself facing retirement, with the same distaste. The executives he had hired at Alpha Innotech were eager to get back on the life sciences start-up track.

Enter SBIG. Fifteen years before, when Bissinger rekindled his hobby, he had met one of the company founders at an astronomy show. It was a random event - he had seen the sign announcing the show from the road and decided to stop by. He was surprised at how advanced telescope technology had become. The impact of the film-replacing digital camera literally opened up a new universe of imaging possibilities.

The team founding Aplegen decided they wanted to own a company that made CCD scientific cameras. Bissinger's long relationship with SBIG made it the natural candidate. The acquisition was announced in February 2011, and Aplegen opened its doors at 5880 W. Las Positas Boulevard.

While it was never a specific career goal to make a business out of his hobby, Bissinger could not be more pleased with the outcome. "This is one of those rare examples where you get to make a successful combination," he reflects. Musing over how he got there, he opines, "Maybe there are people who see the line between point A and B, but a lot of time the connections happen just by driving in a certain direction."

What kept him on his own trajectory was an ability to suss out and take advantage of opportunities, informed by his other interests. "If I hadn't been an astronomer, I probably wouldn't have bought the SBIG camera, etc.," he says.

It helps to be a risk taker. "You have to," he admonishes. "Ultimately, if you are successful in your career, it's because you've taken chances and they turned out well." As an example, he cites an instance at Alpha Innotech when the board wanted to keep a domestic focus, but he wanted to turn the direction to Asia. "It was a good gamble, and it paid off. A big portion of our growth happened in China. It ran counter to conventional wisdom at the time, but it made sense.

"Leaders need to be able to take those kinds of risks and explain why it's worth the effort to pursue them," he continues. Another leadership principle he espouses is giving others what he himself always wanted in a leader - "direction and responsibility."

In the end, a variety of forces have propelled him along his path, but taking action is what gets results. "The role might find you, but you wind up there by doing, not by talking," he concludes.