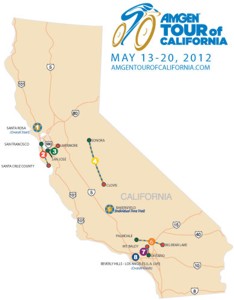 The 2012 Amgen Tour of California - the third-highest ranked cycling road race in the world, after the Tour de France and the Giro d'Italia - will cover a lot of ground in the Tri-Valley on Tuesday, May 15. Challenging some of the world's top professional riders, the rigorous eight-stage contest begins Sunday, May 13, in Santa Rosa and culminates a week later in Los Angeles, on May 20.

Tuesday's Stage 3 San Jose-to-Livermore segment "promises to traverse an entirely new part of the state not showcased" previously, according to the description of the "heart-pumping" route supplied by race organizer AEG, a leading sports and entertainment presenter.

To paraphrase, the race starts in north San Jose, following Calaveras Road and Highway 84 some 28 miles to Livermore. The riders sprint through the city, heading north on Livermore Avenue to Danville. At that point, for the first time in race history and by popular demand, riders will tackle the 3,800-foot-high Mount Diablo, "one of the most revered climbs in California."

Descending into Walnut Creek, the pack heads east in a second sprint to Clayton, and then back to Livermore. The final segment includes a rush up Patterson Pass Road, then down to Cross and Tesla roads and on to a final sprint Finish in downtown Livermore.

At roughly 750 miles long, the Amgen Tour is about one-third the distance of the 2012 Tour de France, whose winding course covers approximately 2,162 miles over the period June 30 to July 22. Nevertheless, the local terrain is considered to present similar challenges. "California offers lot of the same landscape and climate as France, and competitive cyclists use this ride as intense preparation for that race," observes Catherine Ralston, Livermore's Economic Development Manager.

On May 15, the racers are expected to enter Livermore from the south at roughly 12:15 p.m., returning for the Finish between 3:45 and 4 p.m. Sure to be hotly contested, both sprints are also expected to attract large cheering crowds.

"We will be the subject of live television coverage in more than 120 countries around the world," Ralston notes. As a Finish city host, Livermore officials are planning for 15,000 to 20,000 people to show up on race day for "a big downtown party," Ralston says. Entertainment will include live music, 60 vendor booths, shopping and restaurant specials, art activities, and a Breakaway from Cancer Survivor Walk. To allay any concerns about parking, Ralston assures it will be plentiful throughout the downtown area. "Our Wine Festival May 5 and 6 will draw 150,000 people over two days, so we know we can accommodate the crowd," she remarks.

Livermore has the distinction of being one of only four stage locations to host the Breakaway from Cancer Walk. Part of a national initiative to raise awareness of the resources available to those affected by cancer, it represents a collaboration between biotech pioneer Amgen and four nonprofit organizations. A local Champion of Cancer will be honored with a ride on the historic fire truck leading the walkers. The Champion will be selected through online voting at www.breakawayfromcancer.com until April 23.

For more information about times, events, and volunteer opportunities, scan the QR code or go to www.amgentourofcalifornia.com .