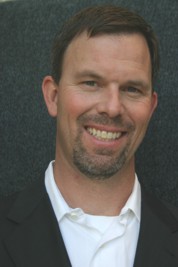 Doug Renner, founder, President, and CEO of Peak IP Solutions, LLC, has always been a go-getter, eager to earn his own way. The start of his computer career is a perfect illustration. In need of a job, Renner, a CalPoly graduate, approached a company in Berkeley that installed computers. He was turned down a few times, but he "kept on banging on the door." Eventually he won them over and accepted an entry-level post cleaning computers under service contracts.

That opening was all he needed. Renner quickly demonstrated his value by picking up billable hours performing additional computer tasks customers would ask for while he was on site. "When I got back to the office, I'd hand in a work order for three hours, and all of a sudden the owners saw that I was ambitious and hard working and generating revenue they didn't expect. In a few months, they put me on integration projects and got someone else to Windex monitors and blow out dust," he recalls.

Renner was able to make the requested fixes because of the time he spent learning computers on his own. As a business major in college, he borrowed an unused PC from a classmate whose father worked for IBM. Renner installed a modem and dialed into the campus mainframe, communicating electronically with the professor of an elective computer science course he was taking. He enjoyed the tinkering, but it wasn't his goal to be a "techie."

Nevertheless, when he started with his Berkeley employer, he realized that if he wanted to advance, he needed to broaden his technology skills. "I bought two computers, set up a client/server network at home, and played with them at night. You learn by doing - that's the Cal Poly way."

LEARNING FROM IT LEADERS

Renner shortly built up enough experience to move on to RR Donnelley as part of a computer networking and integration group. He stayed there for two and a half years, leaving in 1998 to start his own independent consulting business. It was the height of the Y2K frenzy and the dawn of the dot-com era - and a very busy time for Renner. He was not, however, interested in taking on partners to grow the company.

Instead, in 2000 he accepted an invitation from Cisco to join the company as a systems engineer. Over the next three years he honed his expertise in the intricacies of routing and switching, e-commerce architectures, IP telephony, and wireless and security technologies. Then he moved over to Sybase in Dublin, becoming lead IP Telephony engineer for the deployment of a massive telecommunications system for a customer with 26 offices nationwide and 3,000 phones.

Both positions entailed frequent travel, and as the father of two small children Renner decided he wanted to stay much closer to home. In 2004, realizing the full extent of his expertise in wide network deployments, he founded Peak IP Solutions, LLC.

There were some obstacles to overcome in the process. A business experience 10 years back had left him a little gun shy. Just after college Renner had started a house painting company. He knew the field well, having spent a few college summers in an internship with a similar national organization, earning a Manager of the Year award his second summer. He and a few colleagues subsequently broke off to form their own contracting firm. It appeared to be prospering until one day Renner found out there was a significant amount of back payroll taxes owing and no money in the bank.

"I figured the best way to get rid of the debt was to negotiate repayment terms, keep smiling, and run a successful business," he says, adding with a laugh, "They don't teach you that in business school." Renner also negotiated a loan with his grandfather to pay off his credit card debt at a much lower interest rate. "My grandfather would not accept payment even one day late, so that taught me some lessons," he quips.

Over the past eight years, Renner has guided Peak IP Solutions to become "one of the premier unified communications and data management solutions providers in Northern California. Our expertise in voice, video, collaboration, and network integration allows us to be a single provider for a unified experience," he relates. "We focus on companies that have a presence in the greater Bay Area, but we do network deployments all around the world - Europe, Hawaii, Australia, India, Asia."

Settling in Hacienda in 2010, the company has grown at a manageable pace. The employee roster is up to 15 people, with about five additional contractors. Renner is quick to point out that he is now "more focused on the balance sheet and running the business profitability."

For guidance on all kinds of business issues, about five years ago Renner became a member of Iowa-based Heartland Technology Groups (HTG), which operates several peer networking groups for IT industry executives. HTG started as a free resource founded on the premise of businesses helping one another. It was so successful it was turned into a business itself.

Renner's peer group, consisting of a dozen "like-minded IT company leaders," meets quarterly in a non-competitive environment to network, discuss concerns, and share best practices. Unlike Bay Area companies, the industry colleagues all hail from disparate geographic locations so they are not competitors.

The groups have found themselves joining forces for causes beyond their own business interests. Last April two member companies in Joplin, Missouri, were decimated by a tornado, so several business owners volunteered their time to get them up and running again through a program called "Hands That Give." They also help each other on important issues like succession and legacy planning.

Even before he was painting houses, Renner was an enterprising youngster, going around the neighborhood offering to paint house numbers on the curb for homeowners. "I was probably nine years old." He also remembers helping on his older brother's paper route, accepting payment in candy bars and soda.

He grew up in the city of Orange, in southern California, the third of four children, "forgotten and independent," he chuckles. His father was an estimator for a plaster and drywall company that worked on large projects like Disney's Space Mountain. In his leisure time he was a scoutmaster, leading hiking and camping excursions for Renner's older brother's Boy Scout troop. As a Cub Scout, Renner got to tag along.

When he was 12, his father was transferred to northern California, and the family moved to Walnut Creek. "It was a jolt to my being, having to start over and make new friends."

Still, he found plenty to do to keep busy, skateboarding, snowboarding, and surfing. He funded his hobbies with part-time jobs, cleaning his father's office on Saturdays and working in a bike shop to keep close to another favorite pastime, mountain biking.

These days, Renner bikes on less challenging terrain, typically with his family along. His daughters took their first skiing lessons four years ago and are now pretty comfortable on the slopes. The younger one is "quite a gymnast," so the family spends a lot of time cheering her on during competition season in the fall. For real relaxation, they all love to go to Hawaii.

Whether at his desk or enjoying his favorite tropical vista, Renner is quick to acknowledge the drive and perseverance that got him where is he is today. One of the most significant lessons to come out of his 30-year-plus career is the true wisdom of the Golden Rule, "treating people with respect, the way I would like to be treated. That's very important."