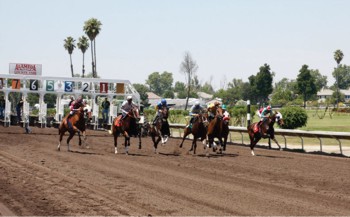 The Alameda County Fair has been an eagerly anticipated beacon of summertime fun for generations. This year it will have more attractions than ever, in honor of its 100th anniversary. The property's known history dates back even further, to 1859, when Don Refugio Bernal built a racetrack on his land grant holdings. The track was revamped and passed through several owners over the last quarter of the 19th century. Today's 267-acre site, owned by the county, first played host to the Alameda County Fair in October 1912, the debut of an event that has grown to attract some 450,000 visitors over its 17-day run every year.

According to the Alameda County Fair Association, the nonprofit organization that "manages the year round operations and the Annual Fair with no tax support," the mission of the fair has long been to "promote cultural education and showcase community talents and achievements." To keep its popularity and relevance, the association is committed to providing "one of the best all-around education entertainment venues for Bay Area residents."

The 2012 program pays homage to the centennial milestone, blending hits of the past like the Diaper Derby with the latest technology-an iPad giveaway on Facebook.

To build excitement during the countdown to the June 20 opening, fair organizers launched "100 Days of Giveaways," a Facebook contest with a prize winner every day. The A-list of prizes ranges from carnival ride wristbands and Oakland A's tickets to an iPad and meet-and-greet with a concert star.

Roughly a dozen Special Days feature a series of targeted attractions. Opening Day offers $1 admission and $1 rides. The Centennial Parade will travel down Main Street at 9:30 a.m on Saturday, June 23. Fireworks shows will light up the skies on all three Fridays at 9:30 p.m. Seniors are admitted free on Thursdays, and kids are free on Fridays. Benefits include Military Appreciation Day on June 22 and a food drive and $1 rides on June 27. The centerpiece of the Fourth of July celebration is a day-long Blues Festival.

A new show schedule is one of the major tributes to the fair's anniversary. "The association wanted to make this year bigger and better," says interim marketing manager Patty Powers. That emphasis translates into a one-concert per night format, at 7 p.m., instead of the traditional two performances, with a star-studded roster of headliners. Opening the fair on Wednesday, June 20, will be Bay Area natives Tower of Power. The 16 other artists include such luminaries as America, Rick Springfield, and Kellie Pickler. The concerts are free with fair admission.

Revived classics like the Diaper Derby, a race of crawling babies, and anniversary-themed activities like a 100-second kissing contest will be sprinkled all over the grounds. Horse-racing and fair memorabilia exhibits are another nod to the past. Fair supporters can also purchase a custom inscribed personalized brick to be permanently displayed at the Alameda County Historical Monument on the fairgrounds.

Not to be overlooked are the perennial attractions: horse-racing, livestock, agricultural, and arts competitions, food, games of chance, and carnival rides. They all add up to a smorgasbord of entertainment for all tastes and ages.

For details on dates and hours, concert schedules, contest deadlines, the 100 Days Giveaway, and other fair activities, visit www.alamedacountyfair.com .