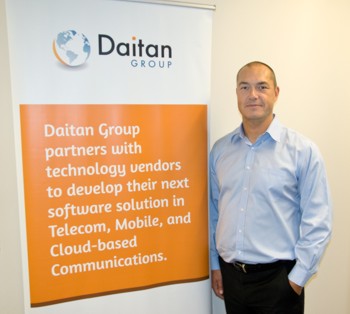 Graham Holt is vice president of Sales and Solution Engineering for Daitan.

The upsurge in mobile communications, social media, and cloud computing has prompted Daitan Group, a Brazilian consulting and engineering services company, to establish a permanent presence in the Bay Area. The company's new office, at 5674 Stoneridge Drive, is currently the launching pad for U.S. sales, marketing, and business development activities. Ultimately it will serve as the home base for the corporate executive team.

Daitan's expertise in custom software development for the telecommunications industry aligns well with burgeoning local technology initiatives. The company has long been providing behind-the-scenes services to the telecom sector, designing, developing, deploying, and supporting technology solutions for such clients such as Skype, Alcatel-Lucent, and Siemens.

Founded in 2004 in Campinas, the Brazilian equivalent of Silicon Valley, Daitan played a critical role in the success of the Bay Area's Ribbit, which was acquired by British Telecom in 2008. "They were developing cloud-based communications services and infrastructure. The executives were focused on the business model, and we became their engineering team," says Graham Holt, Vice President, Sales and Solution Engineering.

Daitan crafted Ribbit's telecom and communications platform, which served as an engine on which to build new applications. "It was a new model at the time," Holt points out, paving the way for similar approaches that have since been adopted by many other communications companies.

The technology is invisible to end users; Holt compares it to the pistons in a car engine. "You never see them working, but they're what makes the car move," he explains. "We provide a similar kind of core infrastructure that runs the world's telecom networks. Every time a call is made, it is probably going through infrastructure and code we've developed for our customers."

Unlike consulting firms that experience the ebb and flow of short transactional projects, Daitan's business model is based on "beginning and continuing" long-term relationships with customers. Holt attributes these enduring engagements to the company's focus on quality, reliability, and a high level of service. With engineering operations based in Campinas, the influence of Brazil's strong technology base is evident. "It's part of the Brazilian culture," he explains. "Our engineers have had a high-quality education, and they take deep pride in their work. A true commitment to partnership is why our first customer, from 2004, is still a customer today."

Hacienda's proximity to the "rich and innovative" environment of Silicon Valley was a prime determinant in Daitan's decision to locate in the park, as were the topographic similarities between Campinas and Pleasanton. "Our CEO, who is from Brazil, looked around and saw the rolling hills, and felt comfortable here. Pleasanton is very family friendly and is a good match for the company."

Currently the Hacienda office has a staff of five, expected to double or triple over the next two years. Total company headcount is roughly 200. Just last month, Daitan Group in Brazil was awarded a "Great Place to Work" designation, coming in at number 36 out of the 100 top companies in that country, as determined by the Great Place to Work Institute and ComputerWorld Magazine. For more information, visit www.daitangroup.com .