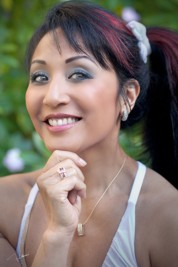 From the Egyptian pharaoh Cleopatra to the French writer Colette, world history boasts many talented and determined women known only by a single name. Hacienda's mononymous figure is newcomer Valentin (pronounced "Valentine"), the owner of Pilates Body by Valentin, who in June relocated her business from Dublin to 5673 W. Las Positas Blvd., Suite 216.

While her studio has been operating for almost nine years, Valentin has spent most of her life involved in physical fitness and mindful movement. Like many young girls, she started off in ballet at an early age. She soon found out that genetics were not on her side. "I just didn't have the physical requirements to be a good dancer: healthy and strong feet," she relates. Dancing takes a heavy toll on the body, and despite her keen sense of movement, "I knew that my feet and joints were not going to hold out into my sixties."

Valentin turned instead to another field that piqued her interest, speech pathology. That was a good choice in the eyes of her parents, both of whom had pragmatically urged her to have a fallback position. "My mom would always say that you can't rely on your body to be your means of livelihood-what happens if you have a car accident?" Valentin recalls.

The Seattle native went to the University of Washington and earned a degree in Education. After completing an M.S. in Speech Pathology at the University of New Mexico in Albuquerque, Valentin became an itinerant speech pathologist working with stroke patients in hospitals and skilled nursing facilities. After a few years she moved into a private school system, serving as a speech therapist for students for more than a decade.

(Courtesy of Pilates Body by Valentin)

In the meantime, Valentin did not completely abandon her original passion for dance. In college her outlet was cheerleading, an activity that was to set the tone and pace for her life to follow. First, there was the distinction of winning a spot on the eight-person cheer squad. "There were hundreds of applicants, and the judges - both male and female - were very discriminating. You really had to have skill to make the team," she comments. Then there was the travel. Chartered planes whisked cheerleaders and the university fan club to away games, all expenses paid. "How nice is that?!" she exclaims energetically. The two years she spent flying around the country on the cheer team set the stage for her globe-trotting future.

Later, as a speech therapist - and a busy mother of two children-Valentin kept a toehold in the dance world by leading group exercise sessions at least once a week. After a series of family moves, she alighted in the Tri-Valley in 1985 and started conducting fitness classes at a local health club.

Her strong belief in the mind-body connection led her to embrace the Pilates Method of body conditioning. Having taught movement for 20 years, she was "ready to develop another facet of learning. I liked Pilates because of its ability to stimulate the mind while exercising."

With an emphasis on alignment and breathing, Pilates has proven beneficial for sports performance, in rehabilitation, and for seniors, not to mention for the general population. It is useful for improving coordination and balance, muscle tone, and lumbar support.

"Pilates is core based," Valentin explains. "Everything emanates from a strong abdominal and back system. If you have core strength, your body will be aligned, and you'll have proper posture, flexibility, and strength."

A founding principle of the approach is "total awareness of where your body is in space, the entire time you are doing an exercise." That translates into a significant advantage while performing the multitude of physical movements required in everyday life, especially among seniors-turning the neck as they back up the car or reaching for a box on the closet shelf, for example.

Beyond typical health club offerings, Valentin has developed her own apparatus-based Pilates program which uses a variety of equipment to "create different environments to challenge the body - standing, seated, on all fours, on the side." With sufficient instruction, practitioners internalize the exercises and learn to move with ease and grace. "Clients say they can hear my voice in their head, reminding them to pull their shoulders down or calling them on their posture - whether biking up Mount Diablo or walking down the aisle in the grocery store."

WORKING FOR OTHERS AND HERSELF

Valentin's hard work and creativity were acknowledged with the invitation to become a Nike Elite Fitness Athlete in the 1990s. Part of the prestigious program entailed traveling the world promoting fitness and Nike clothing. She clearly remembers her first visit to the company campus, where she was given a huge shopping cart and an hour to fill it in the employee store. Among the treasures she gathered was the first pair of baby Air Jordans, a trophy proudly suspended from her car mirror. Program participants subsequently received a new wardrobe every three months, always an enjoyable surprise.

As other professional affiliations followed, Valentin continued to work as a fitness instructor and later was the Group Exercise Director at the health club. In November 2004 she took the leap and opened her own full-service training studio. Her focus on precision, technique, and motivation have attracted a loyal yet diverse clientele.

"My clients have ranged from All-American swimmers, golfers, cyclists, ranked tennis players, and dancers to fitness enthusiasts. I enjoy working with rehabilitative clients with hip and knee replacements or chronic back problems or Parkinson's disease, and there is a special place in my heart for the fun-loving senior population."

In addition to wearing many hats running her own studio, Valentin plays an active role as a faculty member for Sacramento-based Balanced Body, the foremost maker of Pilates equipment worldwide. The position puts her on the road frequently, presenting at conventions hosted by the company around the globe, providing continuing education credits and certifying instructors. "I have been fortunate to teach in the most picturesque cities-Hong Kong, Seoul, and London, for example," she says, noting that this year alone she had travelled 80,000 miles so far - and still has more trips on the agenda.

In December Valentin will be doing an annual gig in Venice, Italy, as a guest instructor. Even before that, she will be teaching her style of Pilates, which incorporates choreography and muscular endurance, to fitness trainers in Chicago, Washington, D.C., and Fort Lauderdale - and, her newest adventure, in Dubai.

Having spent most of her life as a leader, Valentin realizes that one of the keys to success is the ability to motivate others. "One needs to inspire people to do anything, not just to exercise," she insists. A contagious sense of vitality infuses her conversations, accompanied by a refusal to set boundaries. Whether the activity is moving, thinking, sharing, learning, or loving, it is important to be fully engaged, and in her own high-energy yet mindful life Valentin inspires her clients and associates to do the same.