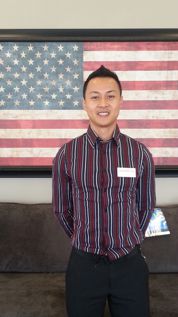 Alex Pham is the embodiment of the American Dream, taking advantage of the opportunity to apply a strong work ethic to the pursuit of success and prosperity. As manager of Homelife Furniture and Accessories, the retail store owned by his brother, Pham is using his talents to grow the business and build a better life for their families.

Pham, his parents, and three siblings immigrated to the U.S. when he was six years old. They had already moved a few times from his mother's native land of Viet Nam to China, Thailand, and the Philippines before landing in San Francisco in 1991. They settled in San Jose, taken in by relatives who fostered the newcomers until they got on their feet. "My uncle had come here with nothing but the clothes on his back, hoping to start a better life. He helped us realize the same dream," Pham relates.

Along with family support, an enterprising spirit and a can-do attitude play an integral role in Pham's success. After earning an associates degree in business administration and marketing from Evergreen Community College, he gave San Jose State a try. "It didn't capture my imagination for very long, so I decided to enter the workforce."

His first job was holding a sign pointing to a new housing development. "I quickly realized it wasn't for me." Sensing opportunity in the advent of digital cable and high speed Internet, Pham took a position selling the services door-to-door. He developed a down-to-earth approach in a pitch that educated prospects about the technology. "This was before the introduction of digital phones, and there was a real need to remind customers that this new service was available to them," he notes.

The experience yielded far more than commission checks; it imparted valuable business lessons for the future. While definitely a challenge, door-to-door selling allowed Pham to hone his people skills and the ability to think on his feet. "You have to quickly earn people's trust, and you must be prepared for the unexpected." One situation in particular stands out. "I remember going into a neighborhood that looked rough. I was speaking to a nice lady, and when we went into her home I was blown away by the beautiful decor inside," he recalls. "This was in an area where you figure you might not make it out with all the wheels on your car. I realized a beautiful flower can bloom anywhere."

After a series of commission-only jobs, Pham decided to broaden his background in the retail sector. He took a job at Fry's Electronics and worked his way up to manager. In the meantime, his older brother, Hai Lee, opened the Homelife store in Modesto. Three years later, in 2010, Lee expanded by relocating to a 30,000-square-foot showroom in Tracy. Pham was still a manager at Fry's but set up the technology for the new store - "website, social media, digitizing everything." After six months, he came on board full time. "My brother said, 'hey, come help me out. It's a great chance to work with people you know and trust.'"

This past July saw another step forward. Organic growth and customer referrals prompted the opening of a second store, at 4555 Hopyard Road. At almost 10,000 square feet, the Pleasanton showroom makes use of open space and attractive lighting to create a comfortable and "really nice atmosphere. Everyone is very friendly here," Pham comments.

True to form, Pham is enjoying the contrast, especially the personal contact. "The electronics environment is fast paced. You don't really get to know anyone," he observes. When selling furniture and home accessories, "you get to know your customers. You sit down with them - maybe they're in one of our recliners, or testing out a massage chair. You talk about their kids, their lives."

Customer service is more than just pleasant conversation, however. Homelife employees have an obvious commitment to the store's mission of providing quality furniture at affordable prices. "This might seem cliched," Pham admits, "but we stand behind our products and go out of our way to take care of customers."

If something goes wrong with a product, the priority at Homelife is to get it back in use quickly. Normally, Pham explains, the standard procedure is to call the manufacturer, wait for a part, then deal with the logistics."We want to skip the bureaucracy to service the customer. Our technicians are familiar with the issues and can go to the hardware store for a part to make the repair right away."

Much of that knowledge has been handed down by Pham's brother, who had extensive experience in the furniture business before opening his own store. "Hai was an apprentice and a delivery technician for a long time. He learned how to sew, upholster, do repairs - all the tricks of the trade. Our delivery people can take apart sofa and put it back piece by piece."

A strong employee focus, including a policy of promoting from within, also shows up on the sales side. "A happy sales force that exudes confidence inspires trust in customers, and that's part of our mission," he points out.

Growing up, Pham did the typical "fun, kid things"-playing in the dirt, "catching things that crawl around, getting my knees scraped." The temptations of drugs and crime, "going around with the wrong crowd," were ever-present, but the strength of family, especially his mother, helped him avoid that minefield. "My father wasn't around a lot, so the burden of raising us fell on my mother. Even though she speaks three other languages, she didn't speak English, so it was tough for her." Pham took on her maiden name as a tangible expression of his gratitude. "She's my rock, and it's my way of honoring her."

A love of sports started with running cross country and playing badminton in high school, blossoming in college with rock climbing and endurance activities. "I fancied going off the beaten track"-for example, climbing up a high peak for a panoramic view, a real thrill for someone like him with a fear of heights. He trains for boldering at a large facility in San Francisco, where he practices climbing without the use of ropes. A cross-training fitness program at a nearby gym has allowed him to achieve a physique he is proud of, and it's a good tension reliever. "I'm in the store here pretty much six or seven days a week, and it's a good outlet to for stress."

At the end of September, Pham took a short vacation in Tahoe to run the Tough Mudder, a "hardcore" obstacle course designed by former Navy SEAL's, and a Wounded Warrior Project fundraiser. Described as a test of "all-around strength, stamina, mental grit, and camaraderie," the experience proved to be especially rewarding for Pham and his team from the CrossFit Gym. "When 17 people do something so grueling and intense, and come out of it celebrating, it's just fantastic!"

Pham is obviously profiting from another lesson: the same core foundation he relies on to pursue the American Dream in business-hard work, building trust, and preparing for the unexpected - has applications in many other areas of life.