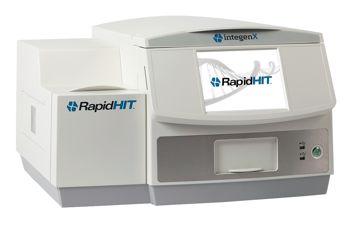 Speedy DNA profiling has been depicted on television and in the movies for several years, but only recently has the capability started to make its way to the market, moving forward at a gradual pace.

A long series of developmental validation studies are essential to confirm the technology is reliable and robust, observes IntegenX Vice President of Global Marketing Tom Driscoll. IntegenX has several customers in Europe, Australia, China, and the U.S. that have deployed the RapidHIT System and are currently validating its performance.

In September and October, the company presented validation datasets at the annual gatherings of three different professional societies dedicated to forensics or law enforcement. Publishing documentation of the equipment's effectiveness in the field is a critical step in the complex review process that culminates in official approval from the Federal Bureau of Investigation and other accredited agencies.

"There are serious hurdles in this process, not unlike those imposed by the Food and Drug Administration," Driscoll comments, noting that the company expects to receive formal approval by the second quarter of 2014. "When that happens, it will open up tremendous commercial opportunities for us."

Over the past year, IntegenX has intensified its focus on DNA profiles, "the fingerprints of the 21st century," in the law enforcement arena. "We do sell to government agencies - for example, the CIA and Departments of Defense and Homeland Security-but the primary focus is to help law enforcement agencies associate genetic data between arrestees and archived crime scene samples faster than they've ever been able to in the past," Driscoll points out.

Driscoll explains that older methods of DNA analysis require a Ph.D.-level technician. That is a main reason behind today's typical 30- to 90-day turnaround for biological samples: they are sent out to join the backlog of other samples that require technical processing and analysis."We take the Ph.D. out of the equation, enabling law enforcement personnel to generate genetic profiles in 90 minutes in their own facilities."

The compressed timeline offers a compelling advantage in crime-fighting, fundamentally changing the way investigations are conducted. The ability to rapidly generate DNA profiles on a variety of biological samples allows forensics and law enforcement personnel to quickly link a suspect's DNA to a crime scene, or eliminate suspicion, all while the suspect is still in custody.

"Giving a local police department the ability to hold a suspect based on a genetic profile saves investigation time, prosecution time, and ultimately makes the local community a safer place," Driscoll says.

As testimony to its utility, RapidHIT was featured on two successive CSI: Las Vegas episodes in November. In each case the technology was instrumental in rapid crime resolution. To view a clip of the system in action, go to goo.gl/EzAVya .For more information, visit www.integenx.com .