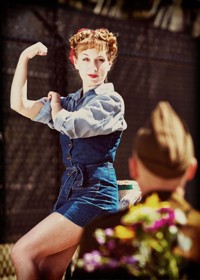 The Taming of the Shrew, Jennifer Le Blanc as Katarina. Photo by Gregg Le Blanc / gregger@CumulusLight.com

Presenting eight performances each of two classic comedies, the Livermore Shakespeare Festival 2013 season opens on June 20 under the stars at Concannon Vineyard. Both plays are clever renditions of works from history's most acclaimed playwrights: William Shakespeare's "The Taming of the Shrew," first performed circa 1594; and Pierre Corneille's "The Liar," a 17th century French comedy adapted by David Ives.

Under the masterful direction of Lisa Tromovitch, "The Liar" retains the details of a traditional production-period setting and costumes, and crowd-pleasing, timeless humor that verges on the bawdy but is still appropriate for children 10 and older.

"The Taming of the Shrew" director Gary Armagnac takes a completely different tack, catapulting his characters from 16th century Padua to America in the late 1940s. It might seem like a daring shift, but it turns out that Armagnac has very artfully connected the dots. "One of the first things that hit me on rereading the play was that all the men and women want to get married," he comments. "It reminded me of when the men came home from World War II." In both settings, love was definitely in the air.

Despite the radical jump forward in time, Armagnac's production remains true to the language of the original work. According to Katie Marcel, Administrative Director of festival producer Shakespeare's Associates, "The costumes and settings are different, but this is still a traditional presentation. We don't change the text, which in fact comes from Shakespeare's First Folio, the closest version to what he actually wrote."

The festival's idyllic venue, on the winery grounds in front of a Queen Anne-style home dating back to 1895, adds a special regional quality to the performances, integrating the surrounding vineyards and beautiful topography into the backdrop.

Armagnac hints at another possible local connection when he has the heroine Katarina make her entrance on stage with a bushel of grapes in her arms. Perhaps she is "channeling the spirit of Katherine Vajda, California's first female winemaker, who created Concannon wines from 1950 to 1960," Marcel suggests, adding that the "gutsy" Vajdahad been a ballet dancer in Austria before arriving in the U.S. and embarking on her winemaking career.

For tickets and other information, visit www.LivermoreShakes.org .