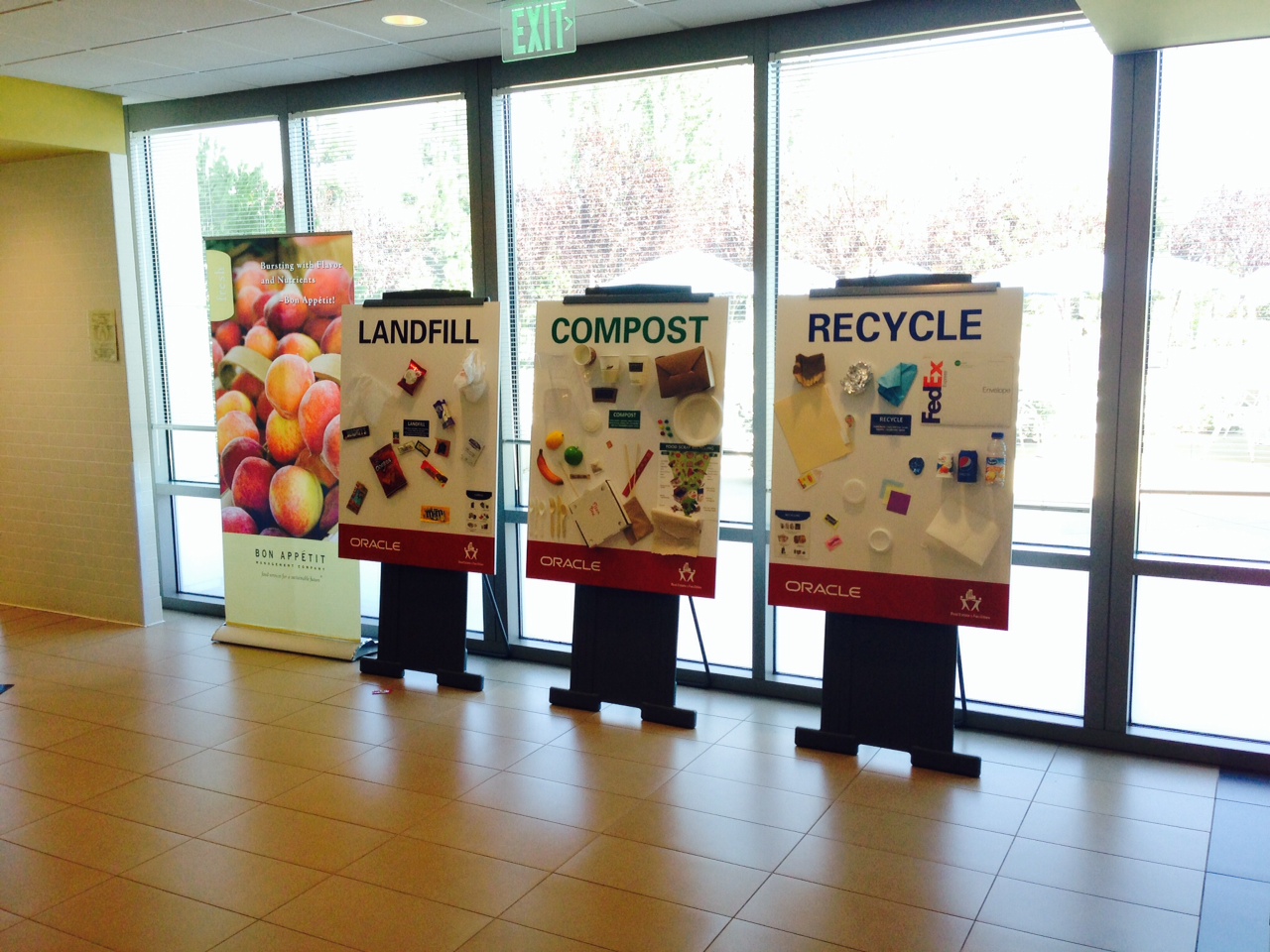 Banana peels, leftover sandwiches and greasy pizza boxes are no longer going into the trash bin at Oracle.

The software giant's Hacienda office is piloting a green recycling program, the first commercial composting program in the city of Pleasanton.

"It's the right thing to do," Tim Roche, Oracle's facilities senior manager, said. "One of the stated goals of Oracle's environmental policy is identifying opportunities to divert, minimize, reuse and recycle our waste stream, so waste reduction is a key initiative for the company."

Oracle has for years recycled much of its trash, like paper, cans and bottles, diverting up to 35 percent of the Pleasanton campus' waste from landfills. But Roche was eager to add green recycling, which Oracle has long had at its Redwood Shores and Santa Clara campuses.

There was one little hitch - the city of Pleasanton does not offer green recycling for commercial accounts.

"The two waste options were landfill and recycling," Roche said of garbage services offered to businesses. "That's different than residential waste options within Pleasanton where there's that third option for green waste, which is composting and food scraps."

Roche got the ball rolling in March 2013 when he approached Pleasanton Garbage Service, which contracts with the city, about launching green recycling at Oracle.

"We were able to get them to buy in on Oracle being the first pilot program in Pleasanton for a commercial buildings composting program," he said proudly. "We've added (green recycling) at all waste receptacle locations - cubicles, offices, break rooms and the cafe. We're encouraging folks to understand the type of waste they're disposing of and choose the proper waste stream so that it goes where it should go. If it's a banana peel, it can now go into composting instead of landfill."

"When we rolled this out, there was a lot of employee outreach to educate our folks," Roche said. "It's common for people in general to not understand a particular product's waste stream. Through active employee education, we've seen impressive results with an increase in our diversion rate since we've implemented composting."

Impressive is a bit of an understatement. In the few months Oracle has had green recycling, the campus diversion rate - the amount of trash not going to landfills - has jumped to an incredible 85 percent.

Oracle boosted recycling rates by converting all to-go products in the company cafe to compostable items. Entree containers, drink lids, straws and even cutlery are made of compostable cornstarch.

"It makes sense to have everything compostable because there's no question about is it going to landfill or be recycled," Roche said. "Everything will be composted. It either goes properly into composting or goes to landfill and will eventually compost. The end game is the same - it's good for the planet."

Pleasanton Garbage Service and the city are working together to determine how they can roll out the green recycling program to other businesses in the city.

Roche is thrilled with the stunning success of the company's new green recycling program.

"I've always had a passion for sustainability," he said, joking that he is a hippie with short hair. "At home, I'm the guy who spends that extra minute to make sure I'm putting things in the right receptacle. Getting 1,600 people to think the same way and to see the fruits of the labor is rewarding to see."

Click on this link to learn more about Oracle's sustainability efforts: http://www.oracle.com/us/corporate/citizenship/sustainability/facilities/index.html .