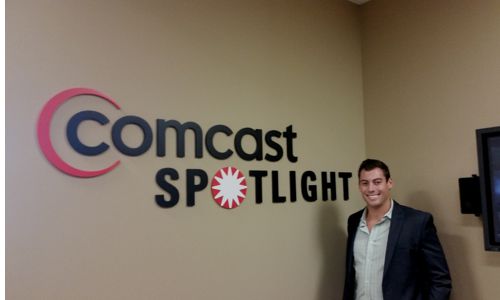 If a business needs to target 45-year-old men who drink gourmet coffee, watch football, drive sedans and vote Republican, Comcast Spotlight can help get the company's product into the hands of those specific consumers.

Comcast Spotlight, the advertising arm of Comcast, gets television advertisements on the right stations at the right times to target specific customers.

In addition to Comcast networks, "we also handle AT&T, Dish, Direct TV and all of that," account executive Maris Moore said. "We can help any local business that wants a commercial on any sort of network - we have over 60 of the major networks - and any live sports you see on TV."

Comcast Spotlight's Bay Area office is based in San Francisco, but East Bay accounts are managed out of the Hacienda office.

"We serve any business that wants to target California, mostly Northern California," Moore said. "This ranges from your local mom-and-pop shop to startup tech companies in the Bay Area. It's pretty much all over the map."

National companies can also benefit by targeting specific audiences throughout the Bay Area.

"Applebee's is a national chain, but they have owners groups in Northern California that have reached out to us," he noted. "We give them targeted messaging and targeted commercials, but they're still advertising that national brand."

Comcast has had an advertising services division for more than three decades, but it recently was rebranded as Comcast Spotlight with a renewed emphasis on spreading the word about targeted advertising.

"We find a business, and we help them create the TV commercial and film it," Moore said, adding that customers can also provide their own ads. "Depending on who they're trying to market to, we then take that commercial and show it on the networks that rank highest in demographics for their target consumer."

A perfect example is a local jeweler based in Walnut Creek. That company might advertise in Contra Costa and Alameda counties to draw customers, but likely would not advertise in the South Bay.

"People watch TV and see commercials," Moore said. "It's an easy door opener for me to go into a business and say I can bring them that same sort of national branding and national presence at a local level."

Comcast Spotlight has the Bay Area split into 22 distinct zones. A company can advertise in one specific zone, all 22 zones or any number in between.

"Our smallest advertisers are in one zone and buy early morning and late night because those are the cheapest times of day to advertise," Moore said. "We have some customers who are so big that they want their message across the entire Bay Area, and they buy multiple networks."

Companies can also choose which networks are best for their commercials. The Frys.com Open PGA golf tournament opted to advertise in all 22 zones, but only on the Golf Channel.

Comcast Spotlight has an extensive research department that works closely with Google and the Nielsen ratings group to analyze a seemingly endless supply of consumer data.

"Research will tell me exactly where in the Bay Area these people live, what they watch, what their lifestyles are, when they watch TV," Moore said. "Based on the budget that the client gives me, I propose a successful plan that helps them accomplish what they're trying to accomplish with their target market."

The firm also offers advertising on the xfinity.com website that many customers use to manage their DVR programming.

"We have all these other capabilities for online advertising as well," Moore said. "When we have so many assets, we want to make sure we partner our clients with the thing that's gong to make the most sense for their business."