Rennu Dhillon Brings Her Passion for Learning to Genius Kids 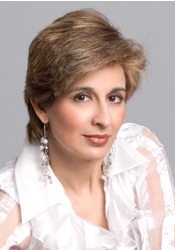 Looking over Rennu Dhillon's career path - training as a chemist and pharmacist, a time setting up Subway sandwich franchisees, and its current peak as the founder and owner of Genius Kids, a daycare and accelerated learning center with 25 locations to date - it might seem difficult to find a common thread that connects such disparate lines of work. Upon closer inspection, however, it becomes clear that Dhillon's determination to learn, taking the lessons of each experience and adding it to her existing knowledge base, has forged a lifetime of success and growth.

Dhillon was born in Kenya and later attended boarding school in England. The daughter of a physician, she faced very specific expectations from her parents. "Growing up, we were very limited to career choices - the options I was given were doctor, dentist, pharmacist, accountant or engineer. I didn't want to do medicine at all and there's no way I was going to be a dentist because I didn't want to look into somebody's mouth," she says. "I thought, pharmacy is as close to medicine as I want to get. I just did it because I was super bright in science and it was assumed that because I was good at science I was going to be a doctor."

She worked as a pharmacist in England before marriage brought her to the U.S. 30 years ago, when she joined her husband in business as well. "We got the rights to develop the Subway franchises for four counties in Northern California, so I gave up my career and got into that," Dhillon says. "People would come to us with their life savings, looking to achieve the entrepreneur's dream, and we would set them up, and we did phenomenally well. We opened about 300 in five years and I was doing sales and operations. I learned all my franchising experience from there."

The Seed of an Idea and a New Beginning

It was during that time that she first encountered a dilemma which is familiar to many working mothers. "I had two little kids and I could never really find what I thought would be the right daycare program for my kids," she says. "The education system (in Kenya and England) is very different from the U.S., and here I felt that the schools were either too academic or too play-based, and there was nothing in the middle. So I thought to myself, hey, maybe one day I'll think about doing something, and kind of put it on the back burner."

That need became more acute after a divorce. Her taste of entrepreneurship left her with a drive to open her own business but she once more faced a familiar problem. "I again went out to try to find suitable daycare and couldn't find anything that was good, so I started teaching my kids, and the next thing I knew I was teaching the kids of other divorced moms. I developed my own curriculum and I thought, 'you know, I think I have something here. I think I've figured out how to work with children, so maybe when I have enough money I'll open something.'"

Dhillon spent almost seven years as a stay-at-home single mom before taking a job as a recruiter. "I started to do really well and eventually saved up some money to open my own business. I opened my very first Genius Kids in Fremont on August 1, 2001, ready to teach public speaking and science, because I felt those were the two areas that were not even touched anywhere else. Formal science is not introduced properly to the kids here until third or fourth grade, whereas back in England and Kenya we started right from the beginning." Her experience in recruiting convinced her of the importance of the public speaking element of her curriculum. "I would get all these great resumes from people and called them in and found out that they lacked confidence and proper interview skills. They had great resumes but they were unable to speak! So my thought was to start them young."

After beginning with a small group of three-year-olds on Saturdays, word of mouth quickly helped her expand her programs. "I started a preschool with five kids, then I developed a pre-K program, from a pre-K it became a kindergarten program, and here I am now in my 15th year of a full-blown daycare."

A Consistent Philosophy to Reach All Children

From the beginning, Dhillon was determined to make her teaching as accessible as possible. "My big focus was that learning should be fun and interactive, because everybody has a different learning style. Some kids learn visually, some learn through books, some learn through repeating themselves. Many kids fall through the cracks because teachers expect kids to be stereotypes, they want them to all be the same and they can't be the same."

That philosophy has led to the introduction of some novel teaching techniques at Genius Kids. One example is the use of interactive technology as a way to captivate students. "We think SMART Board technology is the way to go because now you can take a picture of an apple, for example, and you can enlarge the picture, you can have it move, you can tie it to interactive questions, and what happens is you are engaging the child - and not only that, you are engaging multiple senses," she says. "Our concept is, 'you see, you hear, you say, and you do,' so now suddenly you have a 90 percent retention in the brain because all their senses are engaged rather than just listening to a teacher's voice in the classroom, and you know we all daydream after a few minutes and switch off."

Each Genius Kids classroom is also equipped with a sound system, including a microphone that students use when answering questions. "Here in the classroom you're interacting with others and then you have this microphone in your hand, so every time the teacher asks you something you're going to hear your voice, you're going to speak loudly, you're coming up on stage, so now we're bringing in confidence building and self-esteem as well at the same time."

There is still an emphasis on fundamentals, though. "I feel that the foundation of all learning should be literacy," she says. "Reading is so critical because with reading comes everything else. Most of our kids read before two and a half or three. They're fluent readers - they'll pick up books, brochures, and they'll read to you fluently, and we're very big on that."

The Challenge of Growth

About five years after opening Genius Kids, Dhillon was presented with another interesting challenge. "People started coming to me from different cities, saying, 'you should come here, we want you to teach our kids.' And I thought to myself, 'how do I put myself into ten classrooms all at the same time?' So I created a cartoon character of myself that never ages and stays slim all the time, and created a curriculum where I have recorded myself in these fun, interactive lessons - I've developed about 3,000 of them - and I put them all online. Now, our centers can access these programs online. They still teach in the classroom with teachers, but now the curriculum is consistent."

Her innovative approach to scaling the business has allowed her to employ the skills she first honed setting up Subway franchises, but there's one big difference now: She's doing it with her children. "About three years ago, when my girls were grown up, I asked them if they thought this was a business that was worth exploring. 'If you join hands with me,' I told them, 'we can make this into a franchise.' So they've both come on board and we turned it into a franchise three years ago, and we've gone from three corporate centers to five corporate centers and 25 franchises. It's pretty exciting." Dhillon's sister has also joined the company, running the corporate-owned Pleasanton campus on Stoneridge Drive.

A Focus on Quality

Dhillon has plans to continue growing Genius Kids through additional franchises but is maintaining a keen focus on the quality of the education she is providing her students. "I'm dealing with kids lives; I'm not dealing with sandwiches," she says. "It's easy if you open a franchise for a sandwich and somebody comes in and they don't get a good sandwich - they can go somewhere else next time. But with kids, you're now impacting the lives of children, so it's so important to have the right people involved. So I've been very, very careful and selective about who comes into this business and who's going to represent my brand, because I feel at the end of the day that it's representing me."

The sensitivity towards children's individual wants and needs may be a hallmark of the Genius Kids approach but Dhillon's playfulness is also a key. "I tell parents learning should be fun," she says. "Kids, especially for the first five years, should just explore all avenues. Even in school, let them explore their avenues. Don't try to make them what you want. I think sometimes we parents make our kids try to live the dreams we couldn't achieve, and I think that's wrong. I think that kids should be allowed to fly and soar. They should do what they want to do."

Looking at her own life and the success she is enjoying with her own soaring flight, it seems Dhillon is a qualified instructor.