Cyber Security & IT Training with NetCertExpert 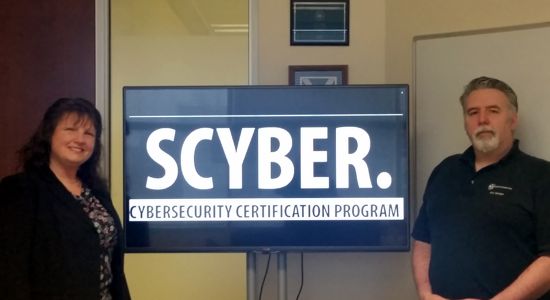 NetCertExpert is improving cyber security with cutting-edge training on how to better secure networks from cyber attacks.

The state-of-the-art SCYBER training class was established by Cisco, which in turn chose NetCertExpert to provide the class to information technology (IT) specialists.

"This is really in response to the plethora of cyber attacks that have taken place in recent years," Rie Vainstein, president and CEO of NetCert Expert, Inc., said. "Most security classes have been teaching students how to build a really strong infrastructure. I'd liken it to building a castle. But then they don't teach the student how to guard that castle once they've built it."

While the SCYBER security training class was developed by Cisco, anyone can benefit from the education, even if they do not use Cisco products.

"Cisco is a security vendor," Phil Morgan, NetCertExpert's lead instructor, explained. "They want to make the market more aware. They don't believe the current training is adequate. (SCYBER) teaches a strategy for adequately defending (a network)."

"The kind of engineers who are used to build the castle (infrastructure) are paid a lot more than the guards (who monitor the network)," Vainstein said. "This new class has been designed to teach the guards how to guard the castle. It will save companies money because they don't have to pay the engineers to keep building a new castle."

It also saves money because SCYBER teaches IT specialists how to prevent attacks or stop them before any damage is done.

"It's a defense to help you not be easy pickings," Morgan said. "At least you can stop as much damage as possible. You learn how to use defenses that companies probably already have."

In many instances, the software needed to protect a system is free or low cost.

"It's going to teach you how to use systems at minimal cost to achieve your objectives," Morgan said. "There are a lot of free products that are very comprehensive that when you put them together will exceed the functionality of a single purchased product."

The five-day SCYBER class is offered at the company's Hacienda headquarters, though companies may also hire NetCertExpert to do on-site training for multiple employees.

While SCYBER is the company's newest training course, it certainly is not its only one. NetCertExpert specializes in training IT professionals.

"We train candidates to get certified to progress in their careers and also people who want to get into the IT profession," Vainstein said. "We take people from entry up to the highest level, depending on how ambitious they are."

"If a company has a problem with its IT network, we can go in and find out what's wrong," she said. "We also train IT teams where there's a need to improve the procedures in a company. If a company has a problem or wants more efficiency, we can go in and figure out what the problem is and then train the IT team. Our training can be tailored to the needs of individual companies."

NetCertExpert was founded in San Jose in 2011 before moving to Hacienda just a few months later.

"There are a lot of companies that offer different portions of what we do, but there doesn't seem to be anyone that runs the gamut from setting up what you want all the way through to keeping that network running," Vainstein said. "We saw a niche that needed to be filled and it seems to be working pretty well."

"As companies' budgets decrease and they don't have money to pay for travel, we're trying to fill that gap," she said. "The way we run our virtual classes is so good. It's like a live class, but they just log in on a computer. It's a real-time online class."

NetCertExpert draws students from all over the country and even abroad, prompting Vainstein to consider global expansion.

"We have students in Europe, so we're talking to a company in Europe to possibly partner with them," she said. "We would like to expand internationally, so we'd have to open locations in other parts of the world. That's one of our goals."