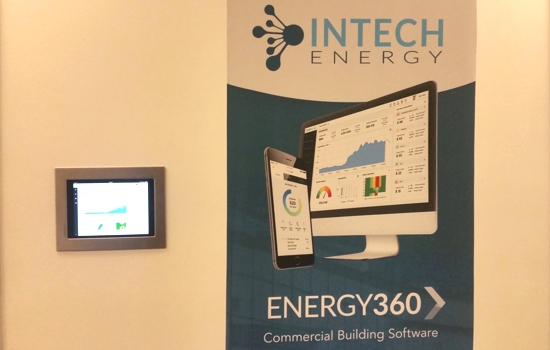 To the engineers at Hacienda's InTech Energy, there is a big problem with the standard electric bill: lack of information. While it is possible to see how much energy was used overall, there is no way to tell how much was used by the specific devices or systems in a building.

InTech's Energy360 provides a solution. The start-up, less than two years old and closing in on its first year in Hacienda as part of Innovate Pleasanton, has created an affordable energy monitoring, analytics, and building control system which can reduce energy costs 10 to 25 percent in mid-sized commercial buildings.

"Commercial buildings waste 30 percent of the energy they consume," says Ben Bradford, the company's senior vice president and co-founder. "That, across the US, amounts to about $40 billion in waste every year, and that would be enough to power all of New York City for eight years."

With Energy360, InTech installs monitors at electrical panels which communicate with the company's servers so that building managers can see "exactly what is being consumed, whether it's lights, HVAC, or whatever it is that's running in your building," says Bradford. "It's real-time energy data, and we put that together in a standard web page, so people can see exactly what's happening in the building right now. That way, you know exactly how much energy you're using and what it costs."

While access to that knowledge alone is a great improvement to the status quo, InTech's vision goes much further. "Today the system allows manual control, where either a user logs in or is notified that rates are going to be high or the weather is going to be really hot and they have to go in and reset their temperatures in the HVAC system to accommodate it," says Bradford. "What we're working on is building that brain in the cloud which will examine all these things, and when the brain senses that rates will be high or the weather will be really hot it will automatically go into econo-mode - it will save the owners money without sacrificing the comfort of the people in the building."

InTech Energy is already experiencing great success. Started by Bradford and company president Ashish Goel in January, 2014, the business now totals 14 employees, a number which is expected to double by the end of 2016. Key to this growth was winning a Southern California Edison bid against a packed list of competitors last year which gives facilities in that territory a rebate for installing Energy360. Dubbed the Mid-Market Energy Efficiency Program, "it's a great partnership between Edison and InTech to help commercial customers save energy and reduce electric bills," says Bradford. "A very large number of Edison business customers qualify for this program."

For additional information on InTech Energy, access their web site at InTechEnergy.net .