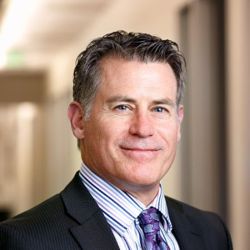 John Krueger, who owns and operates the East Bay office of Mission Benefits, has a sense of humor about being a health insurance broker. "I don't think any kid ever woke up when he was young and said, 'gee, I want to grow up to be an insurance broker someday,'" he laughs, "but it was just an area that encompassed, for me, a lot of my skills. I am a people person. I love helping people. I love solving somewhat complex problems. I bring a real personal touch to this business, and that's kind of what I pride myself on is helping people in this very complex world of health care today."

His entrepreneurial mindset was first shaped in his childhood. Krueger grew up in Green Bay, Wis. (which he says makes him "a transplanted cheesehead") and his first exposure to business was through his father, who ran his own heating and air conditioning business.

"My dad was an HVAC guy - he had his own business for many, many years. Heating and air conditioning," he says. "I grew up working in his business, doing menial stuff like sweeping the shop floor, loading trucks, helping bend metal ductwork, what have you. I always got to see the fruits of your labor, having your own business. That's what drove me toward a business degree and eventually managing my own business."

That business degree was earned at the University of Wisconsin, Eau Claire. "I guess it was just an entrepreneurial bent inside of me that drove me toward the business sector, something that I knew would provide me with a lot of satisfaction, a lot of independence, and hopefully a good income down the road," Krueger says.

While he wanted to work in sales, his first job out of college was installing mainframe computers for the Minneapolis office of a Sunnyvale-based tech company. He was hired on the basis that he would be able to transfer to a sales position after he got to know the business, but despite earning a transfer to the Bay Area in 1987, he left the company a year later because they never delivered on their initial promise.

"I ended up with a company that was selling early PCs, when they were first introduced. We were selling and leasing PCs, business to business," he recalls. "My career took all kinds of different twists and turns - I sold medical devices, I was a high tech recruiter in the dot com era."

It was a family connection that helped him find his current direction. "I had a sister who was working on the East Coast with a company called Colonial Life, and she was talking to me a lot about their company and the culture and what a fabulous company it was to work for, so I ended up interviewing with an individual out here and they offered me a position managing a territory out here in the East Bay," he says. "That's how I ended up in financial services and employee benefits."

It was a fateful move. Not only did he find that he enjoyed working in that industry but also it was through his work at Colonial Life that he first came into contact with Mission Benefits.

"When I was working on the carrier side with Colonial Life, Mission Benefits happened to be one of my customers or clients," he says. "When I called on their business, I noticed that they were a little bit different - they were growing rapidly and evolving as a young company in this market, and the owner of Mission Benefits is a tech guy. He came into the insurance world out of tech, and with a unique story.

"He had a son who was an infant when he got laid off from his tech job, so he was on COBRA (a provision that allows former employees to continue their insurance after leaving their jobs)," Krueger says. "His infant son developed a brain tumor while he was on COBRA, and that is a time when you really need to understand your insurance. If you call the carrier, the broker, and the provider, you can frequently get three different answers to the same question. He thought, 'this is ridiculous - a paper-driven business in what should be a high tech world,' and he set out to change that, to bring technological focus to this archaic world of paper, the employee benefits world.

"That's what I embraced - his approach to an evolving business. I saw his brokerage as very different from the others that were out there. I just thought my skill set and his approach to this business was a perfect marriage, so that's how I ended up with Mission Benefits."

It has turned out to be a perfect fit for Krueger's intellect and temperament. "There's just so many people that hate insurance, don't want to understand it, don't like it, but when they need it, it becomes a pretty critical thing in their life, whether it's having a baby, getting in an accident, or ending up in the hospital because of a sickness," he says. "I enjoy really helping people understand a complex area that most people don't really want to know about. They want to have their health care coverage but until they really need it, they don't understand what they have."

Krueger particularly enjoys working with small businesses. "That's my specialty - to provide for them a competitive and cost-effective employee benefits package that helps them to attract and retain quality employees. That's my world when it comes to dealing with the businesses, but then it goes way beyond that in helping the employees as well. Those are the two things that I really enjoy, because we all know what's happened to the cost of health care over the last 10, 15 years - it has just skyrocketed. There are a lot of reasons driving that, but for a lot of businesses beyond their employee salaries and rent, typically employee benefits is the number three expense to them, so it becomes a pretty critical consideration for those small businesses when it comes to affordability and what we can provide for our employees."

"Some of the things that have come about because of that approach are online enrollment for employees, benefit portals to help employees, a central database where they can go to find their benefits, their plan summaries, and connect with their insurance carrier to discuss billing issues, claims issues, all that kind of stuff," he says. "Now it's really technology driven, where before it was primarily phone calls and paper getting shuffled. Our business has really embraced the technology and some of the advantages it can bring to it, and employers really love that - the reason being that so many younger employees have filtered in and they're really technology savvy. Everybody is carrying around a smart phone and wants immediate access, so that to me is very important."

Above everything else, Krueger values the relationships that he has been able to build through his interactions with his clients. "I really, really enjoy working with business owners. When they trust you because you bring a high level of integrity and they implicitly trust what you're doing - that you always have their best interests at heart - that becomes a business relationship that is solid," he says. "That's my approach to this business: always doing the right thing by my clients. My focus is on the business and the employees and providing for them the very best level of benefits, in a cost-effective, efficient manner."

It is an approach that has brought Krueger success in the past and, given the value of a trustworthy advisor in an increasingly complex field, one that is likely to bring him success in the future as well.