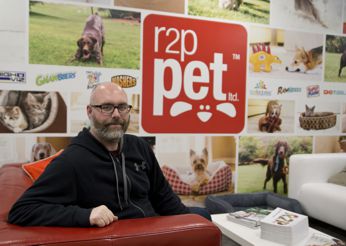 A quick scan of social media is all it takes to confirm that pets are a bigger part of our lives than ever. Witness the near-constant effort to turn the Internet into a comprehensive database documenting every variety of dog and cat behavior.

That is a welcome trend for R2P Group, Ltd., who recently moved their headquarters to Hacienda. R2P, which stands for Ready 2 Play, designs and manufactures pet products including dog and cat toys, beds, leashes, and collars.

"We've been around since 2009. We started in San Diego and moved up to the Bay Area in 2012, we were in Emeryville for three years, and we moved to Pleasanton in July," says R2P account manager Matt Reid. "We run the day to day operations and have design here - we design everything in house - and we have a sister company in Hong Kong that works on the manufacturing and shipping end to get everything out."

For a relatively young company, R2P has accomplished a lot. The company's products are available in the USA, Canada, the United Kingdom, France, Germany, Australia, Japan, Mexico, and Italy. "We do a lot of business," says Reid. "Some of our main customers are Walmart, Petco, Dollar General, and a lot of grocery stores on the East Coast like C&S and Publix." Other outlets include Costco, CVS, Rite Aid, Ross, and Walgreens, as well as FRESSNAPF, which operates over 1,400 stores in 12 European countries.

"Our main focus is being innovative, being fresh, being new. Our design team also does a great job with our packaging - it sells product really well," says Reid. "What we hear most often from our customers is that our products stand out from everything else because in the pet industry you see a lot of things that look the same, use the same materials, have the same kind of feel."

R2P offers a variety of product lines, including Mashers, Rawhiders, Categories, High Viz, Silly Bums, Chewbots, Chew Test Dummies, Zany Bunch, and Multitex, but the company's most popular item is a dog toy called Sprong. "It's a spongy, squeaky toy that's got a lot of give to it, almost like a bubble gum for dogs," Reid says. "When they chew on it, rather than tearing it up and getting the plush out, it's hollow inside and it's got a lot of give to it. The dogs love the squeak on that.

"Our beds have also become really popular. We have a great line called Stuft that sells really well. We also do the licensing for Simmons and Beautyrest, so all the Simmons and Beautyrest pet beds that you see out there now are ones that we manufacture." The company also produces the Dog Whisperer line of products for TV personality Cesar Millan. "Licensing is kind of a big deal for us," adds Reid.

He is optimistic that the company will continue to thrive. "Pets are really part of the family now - you see people dressing up their dogs, and a lot of people almost treat their pets better than they treat themselves, with things like special diets for their pets. It's a really growing industry," Reid says. "When a lot of businesses were down, we were still growing and it still is growing, and it will continue to grow as long as people keep having pets."

For additional information on the R2P Group, access the company's web site at www.r2ppet.com