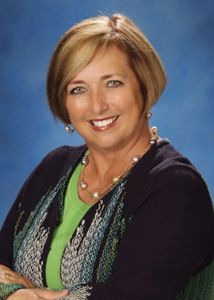 As much as Sherry Adams loves teaching - and you have to love education a lot to start your own school - there is one other thing that captured her heart from an early age.

""People always say, 'Sherry, if you weren't a teacher, what would you do?' I would be singing opera somewhere! I don't know if anyone would pay to see me, but I would want to do it," she laughs. "That love of the arts is important. Who doesn't feel good after they listen to music? It can minister to your soul in many ways."

As it turns out, her affection for music is something that runs in the family.

"I've always had a passion for music and art. It's always been something that I just loved doing, and I always thought it was an important part of growing up," she explains. "My parents both sang and played guitar and drums, so we (experienced) music as part of who we were. My mom and dad actually in their early days actually sang in some of the honky tonks and what not. When I went to public school locally here, music was a very instrumental part of any education, and it's sad to me that that has diminished over time, because I think that's an IQ booster for sure."

Music also led, indirectly, to Adams' current calling as co-founder and chief academic and school culture officer for Stratford School, an organization she started in 1999 that currently boasts nearly 20 campuses across the state, including a location in Hacienda.

"I was inspired by a wonderful music teacher named Mrs. Yancy. I was in her honor choir in elementary school, and I was so proud - we got to record our first album and I just remember how cool that was. Originally in my life, I wanted to be a choir director, so isn't that interesting that I wound up teaching. It played a big influence. When I went into high school, of course, I was interested in the performing arts and participated in the annual school musicals. At the same time, I was still doing academics, but there was a part of me where that fed my creative soul, if you will."

Her experience in the arts and how it benefitted her own development, both creatively and academically, has played a role in how she envisioned Stratford.

"I wanted not only the music but I also believe in a strong liberal arts education. I also think that what we do as educators is we have to foster, if you will, and nurture the child's natural ability, to be curious and to find passion, and to me I look at a simple equation - it's heart and mind," she says. "If you as an educator can nurture a child's heart at the same time you're giving them a great education, then they're going to go on and be great individuals when they leave Stratford, and hopefully in the future they'll do some wonderful thing for society and the greater community.

"That was sort of one of the things that I had a vision for. It was really, truly for me a commitment to learn and a desire for excellence within a holistic educational approach. We certainly want to be one of the best schools academically, and we're doing that, and artistically, but we really aspire for children to reach their full potential without robbing them of childhood. That's the holistic vision that I had."

That vision was also influenced by her initial experiences as a teacher, more than 30 years ago.

"I saw that I sort of sparked something in them," she says of her young students. "At the very young ages, they come into the classroom, they're not sure they want to leave mommy and daddy, and they can be very clingy. I would see that I made a difference in that I could see each child was very different, yet within that difference they had their own unique ways. I always made it a priority as a teacher to take a look at the little things that each child is different about and try to bring out the best in that area.

"I'll give an example. You might have a little boy or a young lady who would always want to count or do something with numbers, so I would make sure that I could provide them with opportunities where we could expand upon that. Or if I had somebody come in who was always dancing, and I would give them the opportunity - and in the lower grades you could do that, because you had a lot more flexibility - and who knew, but by the end of the year these little ones were singing and dancing, they were reading, they knew their math facts, and more importantly, what made me most proud as a teacher is that I saw they had confidence, and I thought wow - really and truly, it all starts in the younger grades and preschool. That's when I realized the true beginning of education, the importance and value of starting in preschool, because that foundation helps push them."

Stratford has been around long enough that Adams has been able to see the results of the school's work and how it has benefitted its students.

"There was a little boy who came into school - this was 2000 - and he cried, his mom wasn't sure she wanted to let him go so we told her, don't worry mom - we've got him, we'll take good care of him, and we worked with him - we helped him socialize and he became one of our top students," she recalls. "Last year, after he graduated from high school, he was accepted into Harvard, and I knew we did a great job in building not only a child that was smart intellectually but he also gave back to the community. I came back from vacation and there was a little note that said, 'Dear Mrs. Adams, I just wanted you to know that I appreciate what you did for me at Stratford School. It gave me the foundation I needed to do other things.'"

The thank you she received did not end there, however.

"Then, he took it a step further - I got an invitation in the mail to a classical guitar concert - you know, the musician in me, right? I loved that! He had rented a studio in downtown San Jose and invited everyone who made a difference in his life. The audience was made up of music teachers, teachers he had through the years, his parents, his grandparents, and it was a beautiful thing. There wasn't a dry eye in the place, and I thought, wow, what a nice young man. And I'd like to think that I had something to do with it. Those are the things that make me proud as a founder, and some of the teachers we have here at Stratford were there, too. We went upstairs and they had a big celebration. It was just lovely."

An event that combined music, education, and gratitude would naturally be appealing to Adams, given her own beliefs in the values of all those things. Ultimately, they are also elements that she wants to see reflected in her school.

"I think what I value kind of aligns with what I see valued at Stratford. I value family and we call ourselves family here at Stratford," she says. "I value honesty and I value education, collaboration, and the arts. It's my sincere hope that every person I touch as a leader here and also what my teachers do with students is that they are transformed by the educational experience that they receive here, and that we give them just joyful aspirations for what they can be in their future. That's really my calling, if you will. That's what we hope, that people are transformed by the experience. That's my goal."