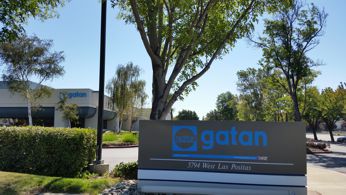 Gatan, Inc., a resident at Hacienda Landing, have successfully launched a new web site designed to provide information about electron energy loss spectroscopy (EELS) techniques. The site, at www.EELS.info, made its debut on March 15 and is already finding an audience. "Early traffic numbers are in-line with the purpose and scope of the website," says Parker Martineau, the company's marketing communications manager.

That purpose is purely educational, Martineau says. "EELS is a very complicated electron microscopy (EM) technique and we are attempting to make it more reachable to the novice user, as well as expanding the knowledge of the expert user."

EELS, which is primarily used by scientists interested in the composition and chemical analysis of various materials, uses the energy distribution of electrons that pass through a thin sample to analyze the content of the sample and create images with unique contrast effects.

In the simplest of terms, EM uses electrons instead of light to form an image. While light will form color images the eye can detect, most electron detectors are simply black and white detectors and return grey scale images.

Gatan's analytical instrumentation product manager, Dr. Ray Twesten, further explained, "EELS instrumentation is used with the electron microscope to create 'color' images. The electrons that are used to form images can lose energy as they pass through the sample creating a 'color' spectrum of electrons. The characteristics of this energy loss spectrum can reveal the location and type of atoms in the sample being imaged at atomic resolution."

The demanding requirements of EM played a large part in the company's selection of their current headquarters at 5794 W. Las Positas Boulevard. "The particular building we are in now was chosen because it can support the vibration and movement requirements for having multiple electron microscopes on site," says Martineau. "Originally, Gatan decided on Pleasanton because of its accessibility to all regions of the Bay Area (580, 680, BART), thus leading to the ability to hire the best potential candidates."

Gatan was originally founded in Pennsylvania in 1964, introducing its first major product for the EM market in 1979. It first came to California in 1983 with the opening of an R&D facility in Pleasanton. Since then the company has greatly expanded its technology into analytical applications and TEM digital imaging. Now a division of Roper Industries, Gatan moved into its corporate headquarters at 5794 W. Las Positas Blvd. from smaller offices on Coronado Lane in 2007. Its manufacturing operation is in Warrendale, Pa., with other development operations in Oxford, England, and offices and dealers throughout the world.

For additional information on Gatan, access the company's web site at www.gatan.com