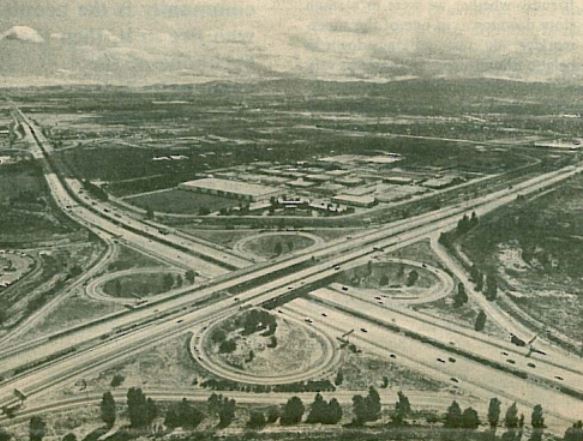 Within the next few years, Pleasanton is going to have some of the state's safest and most efficient freeway interchanges. And most of the improvements will be paid for by commercial/industrial property owners in the North Pleasanton Improvement District at no cost to taxpayers.

Three major freeway interchanges have been scheduled to undergo improvements between now and 1988. In addition, construction of a new Hacienda interchange is scheduled as part of Hacienda Business Park's Phase II and a BART line and station facilities are also planned.

One of the first improvements Pleasanton residents will see, however, will be at the Hopyard Road/1-580 Interchange. Interim plans for this summer call, for the signalization of the left-hand turn off ramps. This will allow vehicles leaving the freeway on to Hopyard Road the right-of-way without impeding or endangering oncoming traffic.

"There has been a need for some sort of signalization at the Hopyard Road off-ramp for a long time now,' states Chris Kinzel, traffic engineer and principal in the transportation consulting . firm of TJKM. "This first step on Hopyard will make it safer and easier for cars entering Hopyard and for vehicles already on the road there.

The Hopyard/1-580 interchange project will also be expanded to include widening the existing roadway on the overpass from two lanes to five lanes and upgrading the on and off ramps. These improvements are scheduled to be completed by mid-1986.

Funding for the project will come from the developers of Hacienda Business Park who will later be reimbursed by the North Pleasanton Improvement District.

The second priority for freeway interchange improvements is at the Stoneridge/1-680 interchange. The overpass there will be improved to five lanes and on- and off-ramps will be built.

"The Stoneridge interchange will also provide a way for Pleasanton residents to get directly to 680 without having to use other interchanges or go clear through town!' comments Kinzel.

"The Hacienda interchange will be the highest frequency interchange; notes Kinzel. "It will be built to very high standards and, in terms of both aesthetics and efficiency, should be very attractive to the community and to Hacienda employees going to and from work!'

The Santa Rita Road interchange is also scheduled for improvements, which should be completed by late 1988. The improvements involve widening the overpass from two to four lanes and upgrading of these on- and off-ramps.

Kinzel explains that anytime improvements or changes are proposed for interstate freeways such as 1-580 and 1-680, they must go through a very strict environmental review and analysis. They must meet some very stringent guidelines and satisfy the requirements of the city, county, state and federal highway associations. The complete process can-take up to three years. However, both the Hopyard Road and the Stoneridge interchanges already have state approval and should be completed by mid-1987. State Transportation Improvement Planning, (STIP), approval for the Hacienda, Old Santa Rita Road interchanges are in process right now.

"There has been a need for long-term planning for the area on regional issues and it's good that we are finally paying attention to that; says Kinzel. "1 feel very confident that Pleasanton will not experience any major transportation problems because an awful lot of high quality transportation planning bas already been done. We are way ahead of the game!"

In addition to the improvements be-ing funded by the North Pleasanton Improvement District, Cal-Trans has scheduled a few projects that are 100 percent state and federally funded. These include improvements on the I-580/I-680 interchange and the widening of 1-680 from four lanes to six lanes south of 1-580 and from six lanes to eight lanes north of 1-580. These improvements are expected to be completed by 1990.

To see a reproduction of the original article and edition of Pleasanton Pathways, visit:
May 7, 1984 Pathways