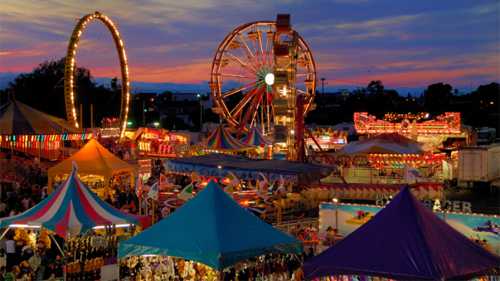 During the warm days of summer, the Alameda County Fair showcases carnival rides, pig races, a petting zoo, specialty foods, fireworks, and exhibits of all sorts. Nearly 500,000 visitors attended the 2017 Alameda County Fair, which makes it one of the top 50 fairs by attendance in the United States.

This event has become an annual tradition for many thanks to its variety of attractions. In 2017, some attendees were drawn to the art, garden, and agricultural exhibits. Some went to the fair for the events, which included all-Alaskan pig races, an RV demolition derby, and concerts from a gamut of performers, including Sheila E and Tower of Power.

Some people attended the Alameda County Fair to enjoy the games and rides of the carnival midway, which included two traditional Ferris wheel rides, while others went to the fair to shop for unique, handcrafted items at the fair's Artisan Alley. Any number of people attended the fair for its food, which included deep-fried Oreos, Krispy Kreme burgers, cotton candy, and lobster french fries.

From Racetrack to County Fairgrounds

The Pleasanton Fairgrounds Racetrack predates and gave birth to the Alameda County Fairgrounds. "The 'Oldest One Mile Track in America' was built in 1859 by Don Refugio Bernal on 52,000 acres of land known as Rancho del Valle de San Jose," according to the California Horse Racing Board. The dirt track is home to Thoroughbred, Quarter horse, and Arabian racing.

Mary Forney, who wrote the report, "Rich History, Bright Future: The Alameda County Fair at Pleasanton," for the Thoroughbred Owners of California, notes that Pleasanton's association with agricultural fairs started when the racetrack hosted the Golden Gate Fair in 1902 and then the Pleasanton Fair and Races in 1904.

Canadian businessman Rodney G. Mackenzie bought the racetrack property in 1911, according to Victoria Christian in her book Alameda County Fair. After investing an estimated $250,000 in building a grandstand for the racetrack and stables for 300 horses, Mackenzie was eager to profit from his new purchase and successfully lobbied local business owners and ranchers to hold a county fair on his property.

The 1912 Alameda County Fair was financed through stock sold at $100 per share. According to several accounts, the first fair was held October 23 to October 27 and attracted thousands of visitors. The fair presented exhibits of cut flowers, plants, and livestock, the type of attractions familiar to modern visitors. It also included less familiar entertainments such as pitting grammar school students against one another in a best-handwriting competition as well as a contest for best-drawn map of California.

Not Too Spicy Please

Over the years, unexpected developments have affected-or threatened to affect-the fair's operation. In 1913, for example, a local newspaper ran a warning to ragtime music fans under the headline, "Rag Dance Allowed If Not Too 'Spicy'." The article reported that "the ban has been raised on ragging by the Alameda County Fair association, according to an unofficial announcement made this morning. The fair will open Wednesday afternoon at Pleasanton and dancing will be a feature of the program. Raggers, however, have been warned not to make their dances so spicy as to cause complaint or the lid will descend."

The lid did descend in 1915 but not because of spicy dancing. The fair was canceled that year in the face of competition from the Panama-Pacific International Exposition, which was hosted by San Francisco. Then in 1917 the US entered World War I, and the fair was overshadowed by more important issues. Happily for the Tri-Valley, the fair returned to Pleasanton in August of 1939 as the Alameda County Agricultural Fair and Horse Show.

"This fair included a carnival with four rides and 20 games and concessions," according to a Pleasanton Weekly article that was based on a book about the Alameda County Fair called Celebrating Family Fun at the County Fair! by Bob and Pat Lane. "There were vaudeville acts, dancing in the evening, and some displays of produce, livestock and homemaking, but the horse races were the main attraction and income. The total profit was $78, only possible because so many residents volunteered their time and due to the $19,800 brought in by the races."

While some may think of the fairgrounds only during the fair, it is busy every month of the year. Ten buildings and eight picnic areas are included on the property, and a staff of experienced event coordinators and event operations members support the success of more than 300 events annually. These events range from corporate meetings to private weddings to world-famous extravaganzas such as the annual Scottish Highland Gathering & Games, which attract tens of thousands of visitors to Pleasanton.

The Alameda County Fair Association also has a long history of community service, as well as a history of industry excellence. The Alameda County Fair is one of most recognized and awarded fairs in California and throughout the United States. In 2016 it won many industry awards, including first-place honors in the categories of Competitive Agricultural Program, Innovative Use of Technology (Agriculture Programs), and Competitive Exhibit Display Method.

"To be recognized within the industry is a tremendous honor, and I am proud of our team and their commitment to education, innovation, and community," said Alameda County Fairgrounds' CEO, Jerome Hoban, on receiving the distinction.