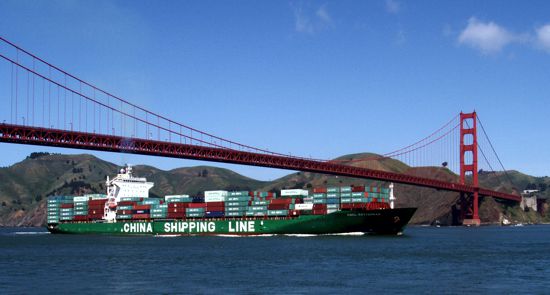 The critical importance of moving goods to market led to the founding of the East Bay Transportation & Logistics Partnership in 2014. This public-private partnership works to coordinate efforts among local companies in the transportation and logistics industry, public agencies, and regional educational entities to build the modern, world-class East Bay distribution center-and labor force-that area businesses need.

"We are a vehicle for East Bay companies involved in transportation and logistics to come together, set priorities that relate to competitiveness and growth, and work at a single table with a range of public-sector partners to take action," notes the partnership.

"The world is changing rapidly, and so are the ways goods are made and moved. Manufacturing and logistics are undergoing dramatic transformations, including in the San Francisco Bay region. At the same time, geographic regions are growing in influence, and regional politics are becoming even more important."

Within the San Francisco Bay Area, for example, 30 cities are working together within the Bay Area Urban Manufacturing Initiative to help create a well-defined and interconnected regional manufacturing ecosystem. The City of Pleasanton alone has an estimated 90 manufacturing companies. As the number of Bay Area manufacturers grows, so does the economic importance of creating policies, programs, and investments that can help the East Bay develop into a globally competitive distribution center.

"A lot of companies are either making or moving products in the Bay Area," says Alyson Greenlee, Director of the East Bay Transportation & Logistics Partnership. "If you are one of those companies, you should join the partnership because it is aggregating information that relates to you in terms of policies, programs, and investment. And it is advocating for the success of your industry in terms of business development, infrastructure, and workforce development."

The need for robust transportation and logistics extends far beyond manufacturing. According to the partnership, about 30% all jobs in the Bay Area are in industries for which moving goods to markets is critical for operations. In addition to manufacturing, these industries include retail trade, wholesale trade, construction, agriculture, and transportation/warehousing. Several such companies make their homes at Hacienda, including Seaspace USA, Technical Transportation, and Yusen Logistics.

In order to stay competitive, stakeholders in regional supply chains need to connect and work together. "We envision the East Bay of the San Francisco Bay Region as part of a globally competitive manufacturing and distribution center that is supported by a talented workforce, world-class infrastructure, and public policies that support efficient goods movement," notes the partnership.

The East Bay offers access to many important transportation resources, including the Port of Oakland, which is the fifth largest container port in the United States. This region is also home to roadways that carry some of the highest volume of trucks in California, two of the most active airports in the western US, major rail lines and rail terminals, and several specialized seaports. A total of $1.0 trillion of goods moved to, from, or within the Northern California megaregion in 2015 alone, according to the partnership.

Employment in the transportation and logistics arena is growing globally, nationally, and regionally. According to Keeping the East Bay Moving: A Study of the Transportation & Logistics Sector produced by the partnership, East Bay job growth for the sector is projected to be 11% between 2014 and 2024. That new job growth, along with worker replacement needs, "will create a substantial challenge for employers to not only fill the new positions, but to replace their most experienced and highly skilled workers who retire or leave the labor force," according to the study.

A Place at the Table

"Transportation and Logistics has not had a place at the table in legislative and policy discussions," says Mark Orcutt, Communications Director for the East Bay Leadership Council, which accepted the partnership into its organization as a taskforce. "The East Bay Leadership Council will make sure their voice is heard. Because you don't have thriving regional economy without a world-class infrastructure to move goods and people.

"From our perspective, the issues that the partnership cares about are universally important to the Hacienda community and greater East Bay. The partnership cares about working with educators to align what we teach in our classrooms with what students need to know on their first day on the job. They care about developing a world-class infrastructure to keep the economy moving. It is hard to imagine any business that cannot benefit from the work of the partnership."

Greenlee encourages businesses at Hacienda to join the East Bay Transportation & Logistics Partnership to make their voices heard. There are sliding-scale membership fees available as well as observing memberships for financial services, law firms, and related companies that need to stay up to date on this sector.

The partnership has been actively working with stakeholders on workforce and other issues. The group was originally born thanks to a US Department of Labor seed grant. Although still young, the East Bay Transportation & Logistics Partnership has accomplished a great deal since 2014. Between June 25 and July 20 this year, selected students at the College of Alameda will be part of the 2018 East Bay Logistics Workforce Incubator, which gives the students work as paid corporate interns while they earn a certification in logistics.

Earlier the partnership held a roundtable with instructors from community colleges and jobs resources centers to provide input on 21st-century essential skills for the workplace. Members of the partnership have also promoted goods movement by joining representatives of regional economic development agencies as part of a delegation to the California Assembly and Senate.

Other efforts by the partnership include briefings with regional transportation agencies to provide input into the regional goods movement strategy and participation in a grant-funded apprenticeship opportunity for transportation companies to get paid community college tuition for employees.

"Our collective objective is to leverage prioritized and strategic leadership between industry and policy makers," says John Swinnerton, VP of Operations and Logistics for Dreisbach Enterprises, an East Bay company that is a founding member of the partnership. "This collaboration will facilitate educated decisions that will maximize economic opportunities in the East Bay and surrounding regions. In addition, the need for a trained workforce is imperative for this vibrant and growing sector."