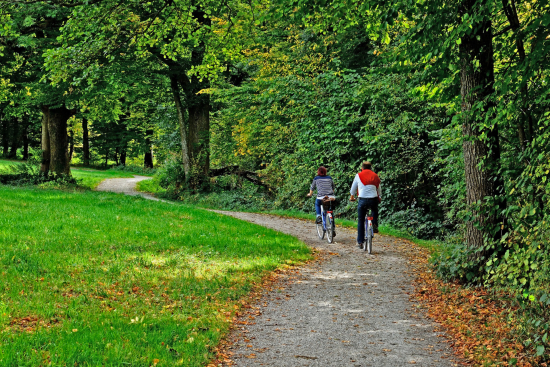 The primary goal of the Trails Master Plan is a complete city-wide trail system that allows safe access to nature and recreation for the entire community. The envisioned future system would include 150 miles of trails compared to the current 82 miles of trails within the City of Pleasanton.

"Overall, our goal is to increase the ability of people to get from one place to another without getting in their car," says Matt Gruber, City Landscape Architect for the City of Pleasanton.

The objectives for the updated Trails Master Plan are to: ? Accommodate the full range of trail use interest, including walking, hiking, running, strollers, wheelchairs, dog walking, road bicycles, mountain bicycles, skating, rollerblading, and horses. ? Create trails that are well maintained and managed for sustainability, enjoyability, safety, and compatibility with surroundings. ? Minimize conflicts between trail users by designating appropriate uses for different trails and designing facilities that accommodate the appropriate trail uses. ? Engage the community in enjoying, building, maintaining and managing trails - providing a sense of ownership.

"What we have planned for Hacienda is taking advantage of the leftover spaces to connect areas," says Gruber. One major improvement in the works is making the area around the Hacienda BART station "more connected" for pedestrians and cyclists. That would make it easier for them to navigate from the BART parking lot to the Iron Horse Trail, the 40-mile regional multi-use trail for pedestrians and bicyclists that runs through Hacienda and extends from Livermore in central Alameda County north to Suisun Bay at the northern edge of Contra Costa County.

According to the draft version of the Trails Master Plan, 32 miles of the Iron Horse Trail are complete and open to the public. In Pleasanton, the trail directly connects to the Hacienda BART station near the northern end and extends south to near Shadow Cliffs Regional Park. After the BART parking lot improvements are made, a continuous trail will connect Livermore, South Pleasanton, and the Hacienda BART station to the northern part of Iron Horse Trail.

Within Hacienda, the draft Trails Master Plan envisions adding new trails and connections to the Iron Horse Trail. Currently there is an existing trail along the new Harding Park in Hacienda. The city plans another connection to the Iron Horse Trail just south of the park. The city is also working with Kaiser to open another trail across the Kaiser property in Hacienda, according to Gruber.

The East Bay Regional Park District owns and maintains the Iron Horse Trail, which is used for an estimated 1 million trips each year. In addition to closing the Iron Horse Trail gap at the south side of the Hacienda BART Station, the City of Pleasanton also hopes to improve the crossing and connection of the trail at Santa Rita Road and Stoneridge Drive, including connection to the Arroyo Mocho Trail, and to close the gap at the Stanley Boulevard and Valley Avenue intersection.

The Arroyo Mocho trail is one of Pleasanton's most popular trails, according to Gruber. It runs through Hacienda along the south side of the Arroyo Mocho canal. According to the draft document, the Arroyo Mocho Trail "provides significant transportation and recreational benefits to local residents." The trail is open from the Alamo Canal/Centennial Trail on the west to where Stoneridge Drive crosses the Arroyo on the east. Most of the north bank access road is closed to public.

As noted in the draft document, a contingency of Pleasanton residents would like the north side of the maintenance road along the canal to be reopened as a trail as it was in the past. The city plans to work with Alameda County Water Agency Zone 7, which is responsible for drainage and flood control facilities in the region, to try to regain north bank access for cyclists and pedestrians.

Additional improvements addressed in the draft document include a desire for safe trails to high schools. This was a priority mentioned by several residents giving feedback on the draft plan. Projects on the Trails Master Plan list will address that concern and include Arroyo del Valle Trail improvements to Amador Valley High School; Marilyn Murphy Kane Trail Connections to Foothill High School; and the Regional Rail Trail Project to Horizon High School.

Earlier in the year, after an update on the plan drafting process, City of Pleasanton Vice Mayor Arne Olson said, "My view is this really speaks to the quality of this community, that we've got residents, prior councils, a current council, and we've got staff that really cares about this. It really says a lot about Pleasanton."

Maintaining the quality of life that draws new residents and businesses has long been a focus of the City of Pleasanton. Updating the city's Trails Master Plan is in keeping with the city's priorities. As the draft notes, "one-fourth of all trips people make are one mile or less, but three-fourths of these short trips are made by car. Having a complete trails system separated from roadways encourages people to make these trips without driving, which benefits health, the environment, and local traffic congestion."

In turn, "opportunities for outdoor recreation can attract new business and talented workers and help keep established businesses competitive. Small business owners have cited quality of life as a key reason for choosing a location."

Moreover, "another economic benefit of parks and trails are increased property values for homes nearby. Local and national studies have shown that the market values of properties near parks, trails, or open spaces frequently exceed those of comparable properties elsewhere."

The City of Pleasanton has long recognized the major benefits of parks, open space, and the ability to move to and through them and to get around town without driving, notes the draft document. "Across the U.S. and around the world the general public and professionals in disciplines from health to city planning to transportation are emphasizing the many benefits of trails. There are numerous studies that characterize and quantify these benefits, but it only takes a little experience on the trail to be convinced-trails are good for everyone!"