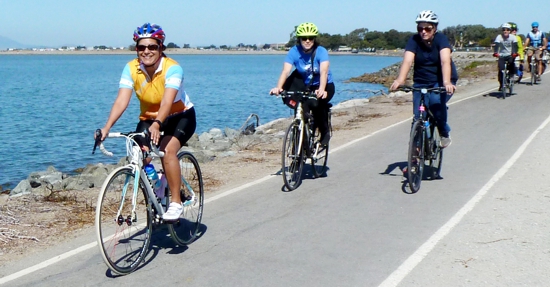 Bike East Bay's mission is to promote healthy, sustainable communities by making bicycling safe, fun, and accessible for everyone. The nonprofit was founded in 1972 as the East Bay Bicycle Coalition. The group successfully advocated for bicycle access on BART trains; thanks to its work, bicyclists are now accommodated on all local and transbay buses, ferries, local Amtrak trains, and on shuttles over bridges that do not currently offer direct access for cyclists.

"As a society, a lot of things feel up in the air right now," says Eileen Rice, Communications Manager. "One way we are stepping up to the moment is by providing our free bike education classes online. Our award-winning bicycle education program is taught in multiple languages by nationally certified instructors." Class topics range from urban cycling skills to how to carry things by bike to theft prevention to bike camping and much more.

"Our organization is special because we advocate for better biking across the entire East Bay-Alameda County and Contra Costa County-so when you're crossing town lines or county lines, your bike lane doesn't end," notes Rice. Bike East Bay works closely with the three local advocacy groups in the Tri-Valley: Bike Dublin, Bike Pleasanton, and Bike Livermore.

Bike East Bay worked alongside Bike Pleasanton to advocate for safety improvements at the Iron Horse Trail crossing at the intersection of Stanley, Valley, and Bernal. That became the first protected intersection in the Tri-Valley. In Pleasanton, the current focus is on the ongoing safety and protected bikeway improvement designs for West Las Positas, according to Rice. In Dublin, the bicycle and pedestrian master plan outreach process will soon begin and when it does, Bike East Bay will work with local leaders to facilitate high-quality public input for future bicycle and pedestrian improvements throughout Dublin. In Livermore, the nonprofit works with local advocates to ensure that high quality bikeways are included in repaving projects.

Bike East Bay is also engaged on regional issues. These include advocacy for improvements to the Iron Horse Trail, funding for transit and bike infrastructure, and improved multimodal transportation for commuters in the region. The nonprofit accomplishes a lot with a small staff-fewer than 10 people, which makes its 4,000 members all the more important, according to Rice. The active support of that membership makes it possible to advocate for cyclists and others in a variety of settings. The nonprofit's work has made a difference, from advocating for cyclists and pedestrians at city halls to pushing big projects, such as the path on the Richmond-San Rafael Bridge that opened in 2019, to supporting in-town networks of bike lanes in East Bay neighborhoods.

"So much of what happens in our communities can sometimes feel invisible, like decisions about whether a street should include more parking or more room on the sidewalk, or new street designs decided on at city council meetings that run late into the night," notes Rice. "Bike East Bay works to make sure those plans include input from the community itself. We work to hold elected officials accountable, and let them know when designs need to be better. We want biking to be a mainstream, comfortable, and safe choice for people of all cultures, ages, abilities, and backgrounds. Along with our members, we work with a vision not just for right now, but for future generations."

Anyone can become a member of Bike East Bay and support the nonprofit's work. During May the group is celebrating virtual Bike Month all month with online events, do-at-home activities, giveaways, and more. On September 24, 2020, the nonprofit will celebrate its favorite holiday of the year, Bike to Work Day. "We envision a future filled with people-first streets, and we think that's pretty inspiring," notes Rice.