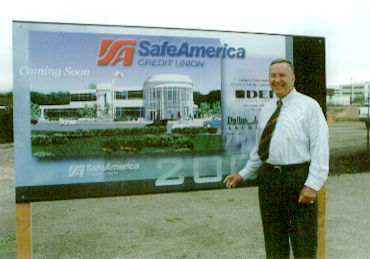 SafeAmerica president and CEO Ron Beasley stands at the building site, in front of a sign depicting the finished building.

Adding to a growing number of credit unions in the park, SafeAmerica Credit Union has begun construction on a 25,642 square foot facility that will serve both as corporate headquarters and Pleasanton branch.

The construction is expected to be concluded and the building ready for occupancy in the second quarter of 2001.

One of the major features, both architecturally and commercially, will be a dramatic glass rotunda. It will serve as the visual centerpiece of the structure and house ATMs and other features to make banking more convenient.

"We pride ourselves on having the latest in technology," explains Ron Beasley, SafeAmerica's president and CEO. "The rotunda will have ATMs and other electronic products."

SafeAmerica was one of the first credit unions to offer home banking and bill paying services. There's more to come, however.

Closing in on 50 Years

The credit union was founded in 1953 and exclusively served Safeway Stores, still their largest constituent.

"We've added about 300 sponsors since the credit unions were allowed to expand their field of membership in the 80's," he says. "Some of the largest are Genentech; our neighbor here, Shaklee; Waste Management; and Deloitte and Touche."

The company even maintains a branch at Genentech's offices in South San Francisco.

In addition to the South San Francisco branch, SafeAmerica maintains branches in Oakland, Concord, Tracy, and Santa Clara, as well as a branch in their current Hayward headquarters.

"We'll keep a branch in Hayward even after we move here," Beasley adds.

The Hacienda location will also feature a state-of-the-art call center.

"A good bit of our business is done by phone and by mail," explains Beasley.

In addition to the checking and savings accounts offered at any credit union, SafeAmerica offers services such as auto leasing; a variety of loans, including car, home, student, and credit card; home banking; debit cards; payroll deposit and deduction; traveler's checks; and more.

The new facility will accommodate a little over 100 people, although Beasley says that they'll probably begin with 60 to 65 employees.

"The building has also been designed so that we can add another 3,000 square feet, so we'll have plenty of room to expand."

Overall, Beasley is enthusiastic about the new facility and its location.

"We're extremely pleased to be part of Hacienda," he says. "It was our intention all along and we're very fortunate to get into the park. This was one of the last pieces of land available."