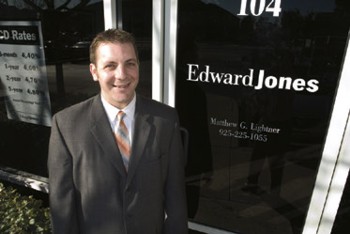 Edward Jones, one of the largest providers of financial services in the U.S., has built its success on providing personal service to one type of client - the long-term investor.

"We run our businesses from individual offices, usually in the towns we live in," says Matthew Lightner, who lives in Pleasanton and has a Hacienda office at 5980 Stoneridge Drive. "I meet all my clients face to face and really try to understand their financial needs. I educate them in everything from the basics of what stocks and mutual funds are to what it really means to be diversified."

Edward Jones opened its first office in 1922 near St. Louis, and by 1977 had grown to 200 offices mostly in the Midwest. Since 1974 the company has been owned by its workers, giving them a stake in its success and promoting a focus on service rather than shareholders. Edward Jones has grown steadily to more than 9600 offices, including affiliates in Canada and the United Kingdom. The firm serves more than 6 million clients and has more offices than any other brokerage in the United States.

And while the company has a full-featured Web presence that includes sites in both English and Spanish, it does not offer online trading, believing that trading is not the same as investing with the personal support of trained professional, which is how Lightner first came to Edward Jones. He was a client for six years before deciding to make the switch from corporate finance to investment broker a little over two years ago.

"I really enjoyed working with them as a client," he says. "I enjoyed their approach to the business, to investing. I always knew that my calling was going to be working with individual clients and working in the personal side of the financial world. Edward Jones had everything I was looking for in terms of an opportunity, in terms of the company itself and what it stands for."

The range of Lightner's clients covers a broad spectrum, from college students and recent grads who are putting money into their IRAs to seniors with multimillion dollar assets they want to protect for their heirs. The majority of his business are people from 40 to 65 who are recently retired or are getting serious about retirement. "People with a lot of options in front of them," he explains, "who want to be sure they're making the right choices, who want help clearly understanding their retirement position."

The success of Edward Jones has been recognized by its clients, its employees, and the industry. In the last ten years it has consistently placed at or near the top of FORTUNE magazine's "Best Companies to Work for in America." In 2005 it was ranked number 1 in the annual SmartMoney survey of full-service brokers, scoring at the top in each of the four categories: stock picking, customer satisfaction, trust, and statements.