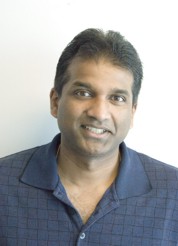 One of the biggest challenges that faces an entrepreneur is identifying a workable idea for a new business. In recent years, however, a common theme has emerged in many new companies: By pairing advanced technology with traditional business operations, it's possible to make those procedures work more efficiently and economically. Those advantages translate into a competitive advantage in the marketplace and frequently give rise to successful start-ups with the potential for vast growth.

That dynamic is key to the vision of Steve Ganesh, the founder and CEO of Pyramid Screening Technologies. "Pyramid is redefining the staffing industry with a revolutionary approach to staffing, marrying cutting edge technology, processes, and people to power the next generation of staffing," he explains. "We call it hiring smartly and efficiently, yet we do not recruit in the traditional way. The staffing methods that worked five years ago may be very out-dated today, and you need to continuously understand how to make things work better and smarter."

His story starts in 1962, when he was born in Paddington, London to a Sri Lankan couple that had immigrated to England only the year before. As one of only three non-white students in a school in a lower-income district in London, Ganesh faced a difficult childhood with many challenges.

"It was difficult to avoid trouble in those days-it always found you on the playground. Remember, some 30 to 40 years ago in London, racism was prevalent at the schools in the area we grew up, Old Kent Road/Bermondsey. In fact, Old Kent Road is the first square on the London 'Monopoly' game board, which probably sums it up."

However, Ganesh survived his childhood and even excelled, graduating from Queen Mary College, London University in 1983 with a Bachelors in Applied Mathematics. He went into software engineering, working for British defense companies and Citicorp, building real-time stock exchange feeds at the latter.

He moved to the U.S. in 1991, working as an IT manager with both Ernst & Young and Bay Networks (now Nortel). During this time, his responsibilities grew to include hiring for his department, and it was then that he began to understand the problem that many HR departments face in hiring technical employees. "I became somewhat frustrated with the under-qualified candidates who were presented to me by HR and decided to build the team myself. To cut a long story short, I eventually turned from an IT manager to an IT/ engineering technical recruiter."

He founded Pyramid in 1995 as a company with a different perspective on hiring. Unlike 98 percent of the technical recruiters working today, he notes, he has actually built commercial software applications, a level of expertise that plays a key role in understanding what hiring managers are seeking. His technical background has also allowed Pyramid to develop software with specialized algorithms that work quickly and efficiently to separate qualified applicants with the potential to thrive in a position from those who lack that ability.

"Many organizations have between 10 to over a 100 recruiters to fill their job requisitions," he notes. "So how can the smaller growing companies with only one recruiter or HR person possibly compete with the mid-to-larger organizations with a team of recruiters and a sourcing budget 10 to 100 times larger? That's where Pyramid can help.

"With our staffing solution, you don't even need contract recruiters or agencies. You only need a HR Coordinator or HR Admin to be involved in scheduling and coordinating interviews, offer letters and background checks, while Pyramid will get you the pipeline of qualified applicants within typically just two to ten business days, enabling the majority of companies to cut their time to fill in half. The impact of getting hires on board within just 30 days instead of 60 to 90 days is truly phenomenal, resulting in increased productivity and increased bottom line. CEOs are embracing this."

An example of Pyramid's success in the marketplace may be found at one of the world's largest online retailers, which Ganesh cannot name due to contractual obligations. This Seattle-based firm had a team of around 40 technical recruiters on staff and over 100 staffing agencies serving them, including a billion-dollar firm which had over 100 recruiters in its nearby offices. Pyramid doubled the placements generated by this firm over the same length of time, despite the fact that Pyramid only had five recruiters working this account part-time from their Pleasanton offices.

Ganesh is reticent when asked about the specifics of how Pyramid's software works, in much the same way that Google has never revealed publicly the algorithms it uses to sort out the responses to searches conducted on its web site. He is happy, however, to give more examples of the company's success.

"You can look at a company like Synarc, a medical device company in San Francisco," he says. "They piloted our service on a couple of accounting positions and got their hires within 30 days. Now, they outsource all their positions to us, and we provide them with a pipeline of qualified applicants for every position, along with EEO reports and other useful information. We also host and manage their career website, which helps give a company a Fortune 500 look and feel.

"This is the future of staffing, where companies can outsource their staffing needs to a vendor like Pyramid, and know that Pyramid has the staffing resources to help them staff better and faster."

Ganesh believes in outsourcing but not in off-shoring. Having lived in the US for the past 15 years and acquiring his US citizenship just over a year ago, he firmly believes that American businesses have a duty to strengthen this country's economy. To him, that means generating jobs within the US and not giving the jobs to other countries. Ironically, his brother David works for an Indian off-shoring company. "The off-shoring model is an intriguing one, but it is one that companies cannot afford to get wrong. That can happen quite easily, however."

From being a one-man show over ten years ago, Ganesh is now building an army of local high-powered technical recruiters. Their powerful staffing solution is already turning the heads of hiring managers and HR departments, while demand is increasing so much that Pyramid has tripled their revenues the last two years and are on course to do the same this year.

"We have a very scalable business model in that we have proprietary, leading edge technology and proven staffing processes in place," he says. "Our next step is to hire additional staffing engineers. Currently Pyramid has 12 employees, but we expect to nearly double by this time next year."

Despite this rapid growth, Ganesh has been able to continue his close leadership of the company. He enjoys being very hands-on working with clients as well as training and mentoring his recruiters, who are usually hired as IT and engineering placements but become fully-fledged technical recruiters under Ganesh's tutelage.

Ultimately, though, it is Ganesh's ability to recognize the HR needs of his clients and match those needs with visionary technology that drives his company's success.

"Many corporations spend a significant amount of their budget purchasing applicant tracking systems, hiring recruiters, requiring a sourcing budget, legal HR compliance and more, but this still doesn't guarantee them a hire," he says. "Pyramid's staffing solution handles all of this, blending together technology, processes and people."