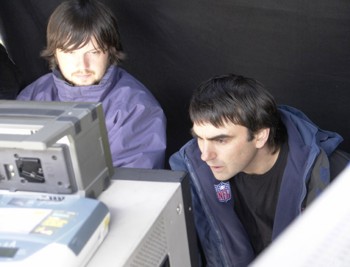 Goal Line Productions and its production arm The Licorice Tree work out of the largest video and film production studio in Northern California with fully integrated editing, recording, and finishing capabilities. Headed by Joe Madden, president, and Eric Heiser, creative director, the company has produced primarily commercials and corporate communications but has become active in TV specials and feature films. It also rents its state-of-the art studio at 5959 Coronado Lane in Hacienda to other production teams.

The studio features a 70 x 100 foot sound stage with a large production office and makeup and wardrobe rooms. It has an edit loft for film and video editing and a sound and recording suite. And to keep cast and crew happy, there's a restaurant-quality kitchen capable of handling groups of any size.

The facility was built in 1995 as a private studio to serve John Madden's production needs. Joe Madden, who studied film and video production in college, came on board to help and learn the production business first-hand from the seasoned pros that worked with his father. As he did, he decided that the studio could also serve the needs of the greater Bay Area production community, and he made the facility available for outside production work.

"I learned by trial and error, and from the people associated with my dad, seeing how it's done, and taking risks," says Madden. "I purchased the gear I could afford at the time and just built it as I went."

Eric Heiser, a long-time friend of Madden, joined him at Goal Line early on.

"In this industry, when you're starting out, it can be somewhat overwhelming because there's so much that you don't know," Heiser says. "But we had a chance to learn from the best, from some really talented people. Now we're in a place where we have a great deal of confidence in our own abilities to do things, and we're excited as we move forward."

Moving forward includes establishing The Licorice Tree as a separate identity for the production side of the business. Because of its origins, Goal Line remained known in the industry as a studio even as it developed its own production capabilities.

"As we continued to become more successful as a production company with our own clientele, we realized that we needed to have a separate identity for those activities," says Madden.

Successes in this area includes the documentary 151: The Greatest Streak , about the historic 151-game winning streak of the De La Salle High School football team, and the horror comedy Dead & Breakfast , filmed locally in Livermore. ESPN purchased the rights to 151 , and after a popular tour of film festivals, Dead & Breakfast was picked up for distribution by Anchor Bay Entertainment. More film projects are in the works.

"Distributors love inexpensive films with a high production value. And that's the thing that we pride ourselves on," Madden sums up. "And that combination also bodes well for more commercial and corporate work. We've been building that reputation for the last 11 years, and it's starting to pay off."