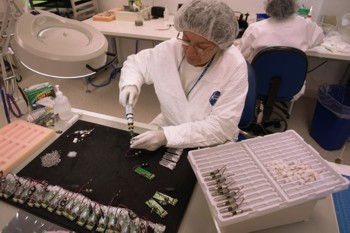 The rapid growth of Sanarus Medical, Inc. is continuing with expansion into a larger facility and the introduction of a new product. The company moved from a smaller facility on West Las Positas Boulevard into an 18,000 square foot facility at 4696 Willow Road in Hacienda last year and has since worked hard to meet the continued demand for its unique minimally invasive devices for the diagnosis and treatment of breast disease with cryoablation, a therapy based on freezing.

"One of the biggest factors behind moving into the Hacienda facility was our need to expand manufacturing," says Russ Delonzor, vice president of research and development. "And with the recent launch of our new Cassi II biopsy product line, we expect that our assembly and warehousing needs will continue to grow."

The Cassi biopsy device was the first product on the market that allowed physicians to obtain large, contiguous tissue samples in fewer biopsy attempts with a completely portable, self-contained unit. Previously, the only option for image-guided breast biopsies was a large cart-based system that delivered smaller samples.

"Based on customer feedback, the next-generation Cassi device incorporates a reusable body and a disposable needle, " explains Delonzor. "With the launch of Cassi II, our clinicians now have the convenience of a single-patient-use device, with a reduction in the amount of medical waste produced per procedure."

Besides reducing waste, the Cassi II system design is more flexible. With the Cassi II, Sanarus can consider developing additional types and sizes of needles for a variety of biopsy procedures.

Like its predecessor, the Cassi II uses a small CO2 canister to immobilize the target tissue in the breast via freezing for precise sampling. Sanarus Medical applies the technique with its patented Stick-Freeze technology. With the Cassi system, a biopsy procedure can be performed in a doctor's office or outpatient facility in about 20 minutes, without general anesthesia. For physicians, the self-contained Cassi II system does not require setup or a large capital investment.

Sanarus Medical also produces the Visica Treatment System, which uses cryoablation guided by ultrasound to selectively freeze and destroy tissue in the target area. The treatment takes approximately 30 minutes and can also be performed in a doctor's office under local anesthesia.

The Cassi II and the Visica Treatment System offer women alternatives to the standard surgical procedures for the diagnosis and treatment of breast tumors. Sanarus Medical's technology and commitment to less invasive, less painful medical procedures have been well received in the market and are reflected in the company's continued growth.