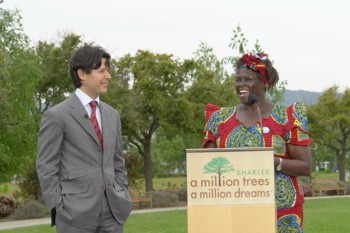 Shaklee Corporation, the number one natural nutrition company in the U.S., held a special tree-planting ceremony Tuesday, April 25, to launch its "A Million Trees, A Million Dreams" initiative and to thank Nobel laureate Dr. Wangari Maathai, whose work provided the inspiration for the global campaign. Roger Barnett, Shaklee chairman and CEO, presented Dr. Maathai with a check for $100,000 to plant a million trees in Kenya.

The trees will be planted through her Green Belt Movement in the deforested mountain areas that are a major source of water for Kenya. The Green Belt Movement grew out of her service with the National Council of Women of Kenya in 1976. Dr. Maathai mobilized local women to plant trees to conserve and restore the environment, which through misuse could no longer sustain them. In thirty years nearly 30 million trees have been planted, and thousands of women have improved their lives through their involvement with her organization. For her ongoing work with the Green Belt Movement and ceaseless support of human rights and environmental conservation, Dr. Maathai was awarded the Nobel Peace Prize in 2004.

Inspired by her work, Shaklee has begun a campaign in the United States and Canada to plant one million trees by encouraging its 750,000 distributors to organize tree-planting events in their local communities at parks, schools, and other public areas. "Shaklee has a long environmental history, from the creation of the first biodegradable cleaning product in the United States to becoming the first company in the world to be certified climate neutral by having a net zero impact on the environment," said Barnett. "This heritage is something we want to continue every day, and in our 50th anniversary year, we really want to do something different, and so this year we're kicking off 'A Million Trees, A Million Dreams.'"

The goal of "A Million Trees, A Million Dreams" is to help offset a significant portion of the carbon dioxide the company produces in conducting business and to raise public awareness of global climate change and the need to address it. Carbon dioxide, produced in large amounts by industrialized nations, is one of the "greenhouse" gasses that contributes to global warming.

"We cannot protect the earth by just talking about it. We have to do something. And one of the simplest and most doable actions is to plant a tree," said Dr. Maathai. "I travel a lot throughout the world, and wherever I go, I want to take this concept of a million trees, a million dreams, because this is an idea that should be embraced by everybody, everywhere in the world."

Shaklee's 128,000 square-foot corporate headquarters at 4747 Willow Road demonstrates the company's commitment to the environment. It is an architectural showpiece of environment- and people-friendly design, energy efficiency, and the use of materials made from sustainable resources.