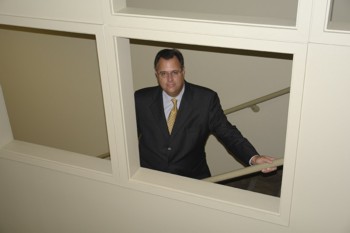 Where there's insurance fraud, Steven Schulmeister and Frasco will be there to find it.

Investigations are part of California's attempt to reform the industry

Insurance fraud is big business. Investigating alleged fraudulent claims and packaging the findings for prosecution is the business of Frasco Investigative Services of 4637 Chabot Drive, the Northern California office of Frasco, Inc., the largest full service investigation company in the Western United States.

"We consider ourselves an insurance defense investigative firm," says Steven Schulmeister, branch manager. "We work with clients that are primarily law firms and insurance companies to investigate insurance claims. This office does work for the Frasco Investigative Services division, which is primarily surveillance, statement taking, background investigation, and locating individuals."

Nationwide, workers compensation fraud is growing and is estimated as a billion dollar "industry." In California alone it would be a Fortune 500 company if it were a legitimate business. Historically, one of the problems has been that there was little to deter people from filing fraudulent claims; few cases were pursued or prosecuted. California has taken steps to reform the system, and while it is a slow process, today claimants are being prosecuted for false claims, forced to repay amounts up to hundreds of thousands of dollars, and some are serving time in prison. Schulmeister, who has been in the business more than 20 years, says that 15 years ago this would not have happened.

The red flags that trigger the investigation of a claim often have a common sense origin. The person is supposed to be home, bedridden or unable to work, but never answers the phone. None of a claimant's coworkers remember an accident occurring on the day in question. A background check reveals a previous pattern of filing claims.

Investigations may begin with a basic check to establish a person's activities, employment status, and the potential for successful observation, and lead to surveillance recorded on a video and backed up with courtroom testimony. Surveillance is not a matter of spying or invading a person's privacy; the person is observed in public places or in plain view. The goal is simply to see what the person does on a daily basis. For example, if someone is off work due to a back injury, a report emphasizes things such as how the person bends, carries things, whether the person walks with or without a limp. Frasco's job in conducting an investigation is not to determine guilt or innocence.

"We just want to see how active a person is. We don't often know everything about the claim, and it's nice that way," says Schulmeister, "because we don't really want to come to any conclusions. It's up to the insurance companies and law firms to decipher if it will be valuable to pursue a claim or deny it, or even possibly prosecute the person for fraud. We're there to report the facts. We're just one variable in a large equation to determine how disabled an individual is."

Frasco, Inc. was established in 1964 in Burbank. The company has three divisions providing investigative services, workplace investigations, and pre-employment screening. It employs more than a hundred investigators at offices in California, Arizona, Nevada, and Minnesota.