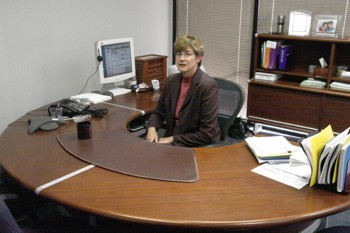 Shirley Lapp, CEO of SCJ Insurance, has led a successful campaign to automate her company's operations.

After a broker sells an SCJ policy, SCJ issues and administers it, essentially operating as a third-party administrator for the insurance companies, doing everything but assuming the risk. SCJ works with about a thousand brokers in California, and while a huge amount of information has to be processed to determine premiums, write the policies, administer the accounts, and keep brokers and policy holders up to date, SCJ has turned this complexity into profitability with its successful automation of the process and use of statistical data.

In 1983 under CEO Shirley Lapp, SCJ began automating its operations. Today applications are submitted, verified, and processed using the Internet, and brokers and policyholders can easily manage their accounts online. An in-house data warehouse enables SCJ to adjust premiums based on its analysis of the insurance environment.

"All of our managers participate in this function because each person brings expertise from their area to the analysis of the statistics," says Lapp. "We maintain a database that goes back to 1993, and we use it to analyze which drivers and which vehicles are more likely to be involved in accidents. And some very interesting information comes out of it."

Statistics reveals patterns you wouldn't expect, such as certain a color of a certain car being involved in proportionally more accidents than others. Data analysis also allows a more precise understanding of risk.

"In today's insurance environment, there is considerable interaction among the various factors," says John Ott, president of SCJ. "The advancement of data warehouses and computer rating have allowed much greater complexity in the design of insurance programs, resulting in a lower premium for the consumer. The risk and premium are much better formulated today than they were 15 years ago."

When asked about changes in SCJ's future, both Lapp and Ott mention a program the California DMV began implementing in October that will affect the whole California insurance industry. The DMV has begun to verify that all registered vehicles are also insured. Police will be able to verify coverage when a driver is stopped, and if the car is not insured, it may be impounded.

Estimates of unregistered/uninsured vehicles in California average 20 to 25 percent, and many of these drivers fall into SCJ's market. SCJ Insurance is poised to help a new group of drivers with their insurance needs.