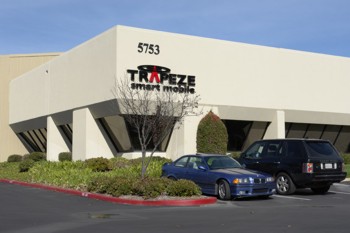 The new Trapeze/SmartMobile logo is featured prominently on the exterior of their West Las Positas Boulevard headquarters.

Trapeze Networks, a provider of wireless network technologies that is headquartered in Hacienda, launched a groundbreaking new LAN product in October that adds intelligent switching to its wireless network solution. Called Smart Mobile, the product is the first to feature an architecture that combines the benefits of centralized control with the performance achievable with distributed data switching, something not previously possible with wireless local area networks (WLANs).

"Smart Mobile represents a fundamental shift in WLAN architectures," says Dan Simone, VP and chief technology officer at Trapeze Networks. "By distributing intelligence throughout the network while retaining centralized policy and management, Smart Mobile delivers the technological breakthrough enabling customers for the first time to deploy next-generation wireless applications such as voice over WLAN on an unprecedented scale."

Current WLANs architectures are referred to as "thick" or "thin." Thick WLANs are built on an architecture that requires all traffic to pass though a centralized controller, enabling efficient network management but resulting in poor performance as network traffic grows. In thick WLANS, extending coverage to more users and applications typically requires hardware upgrades. Thin WLANs distribute the switching to access points throughout the network, but it can be difficult then to view and manage the whole network. With Smart Mobile, switching can take place on a central controller, on a local access point, or a combination of the two, all managed from a single console.

The product uses new, patent-pending technology that enables data-forwarding to be centralized or distributed based on application requirements. For applications that require high performance such as voice over WLAN (VoWLAN), Smart Mobile distributes switching functionality to access points within the network. Wireless phone calls can travel directly from handset to handset without having to pass through a central controller. Centrally controlled VoWLAN networks are limited to about a hundred users and are difficult to extend outdoors; a Smart Mobile VoWLAN network can handle hundreds to thousands and be easily expanded.

"There's been a lot of talk about VoWLAN being a small market because of the centralized architecture. We're now setting up peer-to-peer calls so organizations can get much higher quality calls. This gives you the best of distributed thin and fat architecture," says Simone.

Current WLAN controllers are not designed to take advantage of emerging wireless standards for high throughput such as 802.11.n, the next iteration of the wireless standard by the Institute of Electrical and Electronic Engineers (IEEE). Trapeze Smart Mobile supports high-speed networks based on the coming IEEE 802.11n standard.

Trapeze Networks has 180 employees. It is headquartered in Pleasanton, with operations in Europe, Japan, and the Asia-Pacific market.