FunMobility Making the Most of Mobile Markets 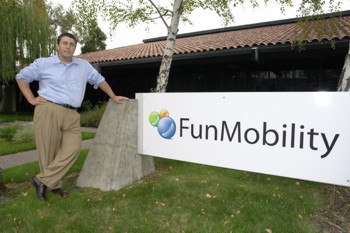 Adam Lavine, CEO of FunMobility, is helping bring user-generated content to the world of wireless.

FunMobility, Inc., one of the nation's largest mobile entertainment companies, recently occupied a new 22,000 square foot office at 5568 Gibraltar Drive. The move supports the company's continued growth. The company has 75 employees now, and if hiring goals can be met, will reach 100 employees by the end of the year.

FunMobility applications and services for mobile phones focus on personalization, entertainment, and community-building. FunMobility supplies mobile carriers with various entertainment modules that they then offer as add-on services, either as complete applications or integrated into their own mobile services.

America's Best Mobile Pix, launched in 2005 and updated in June, allows cell phone users on different wireless carriers to submit photos to various contests, rate photos, and also add text messages to their photos and send them to other users. So far more than 100 million users have cast votes for their favorite photos.

"Analysts have long been saying that what users want in a mobile social networking application is the ability to interact with users who are on different wireless carriers," says Adam Lavine, FunMobility's CEO. "America's Best Mobile Pix is proof of that. No other mobile social-networking application has generated as much user-generated content traffic as America's Best Mobile Pix, and usage continues to grow as more users learn about the service. This is a classic case of users organically creating their own community through user-generated content."

FunMobility has leveraged the photo technology of America's Best Mobile Pix! to create FlirtPix. Scheduled for release in November, FlirtPix will allow users to anonymously and safely exchange visual messages. Users can create personal profiles containing whatever they want to share with other users. They can submit their pictures and browse and respond to images posted by other users. Responses can be sent via a message on the picture, or users can rate the image with from one to five "winks."

"Generation wireless uses their mobile phones constantly as part of their mobile lifestyle," says Lavine. "Flirting is a daily activity with the young demographic which we can monetize with this great new application. FlirtPix gives users a platform to meet and flirt with new people, while still providing the safety and security that comes with mobile applications."

As with America's Best Mobile Pix, FlirtPix contains built-in security. Users can ignore or block other users at any time, and filtering technology and manual review processes remove inappropriate language, images, and contact information. All users can be identified and can be denied access if necessary.

FunMobility's products and services are distributed through over 25 major carriers across North America as well as Latin America.