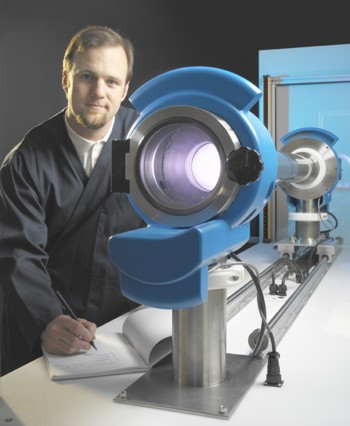 Sub-One's Tom Casserly conducts tests on the company's state-of-the-art coating for pipes and other internal surfaces.

Company's Technology Allows Application of Coatings to Inside of Pipes, Equipment

Sub-One Technology, the developer of a patented new coating technology, recently relocated to 4464 Willow Road. The company employs 15 people under CEO Andy Tudhope, with additional staff in an office in Aberdeen, Scotland. The move to its new facility will enable the company to extend the global reach of its field service staff as it enters new markets and expands product development.

Sub-One developed a process for depositing super-hard, smooth films on the interior surfaces of a broad range of products. The technology uses an industrial process called plasma enhanced chemical vapor deposition (PECV), which is not new. It is the same process used to coat the external surfaces of products such as drill bits to increase hardness and reduce friction and wear. What is different is that Sub-One invented a PECV process that works on internal surfaces. Applications vary from large diameter industrial piping and valves to small, complex metal and plastic components. For example, Sub-One technology has been used to apply a low coefficient of friction, self-lubricating, non-slip surface to the cylinder of a NASCAR engine.

The object is filled with a gas in a vacuum, and a DC electric charge is applied until the gas ionizes - loses molecules. The ionized molecules are attracted to the walls of the object, and a hard, diamond-like film is built up molecule by molecule. By changing the chemistry of the gas, the material of the film can be changed from, for example, titanium-based to chromium-based. Besides its being applied internally, another key difference of Sub-One films is the thickness. PECV film thicknesses are measured in microns - thousandths of a millimeter. (Human hair ranges from about 60 to 150 microns.)

"The beauty of our technology is that it's very thick relative to external deposition technologies," says Tudhope. "Most commercially available diamond-like films are maybe up to 10 microns today. Our technology is so fast in its deposition rate and runs so stress free that we're able to put down 30- to 50-micron films. This is significant to the oil and gas industries."

The oil and gas energy sector is the company's main focus today, primarily because when the company started, the first calls came from oil and gas companies. They were quick to see the potential that tough, internal coatings could have on their equipment. Reducing friction inside pipes increases flow and reduces the pumping pressure needed. A durable coating can prevent corrosion, protect purity, and increase the service life of pipes and equipment while reducing maintenance.

Sub-One Technology was formed in 2004 by Tudhope and a group of engineers who worked with him in the semiconductor industry for a number of years. They spent a year doing fundamental proof-of-concept research on the technology they invented, and then started to raise outside funds. The company is now entering field trials with large oil service companies. Its first product was recently shipped to the oil fields in Calgary, Alberta.