Vigilant Video Keeps an Eye on Your Business 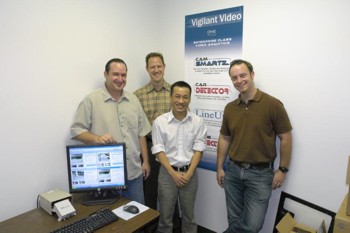 Having an efficient security system is an important part of any business, whether it be protecting products or maintaining a safe work environment for your employees. But at Vigilant Video, business security is more than just surveillance; it is real-time video analytics and reporting that can reduce loss, cut costs and increase performance. In May, Vigilant Video moved into its headquarters at 4511 Willow Road.

"Vigilant Video is a leading provider of Advanced Video Analytics solutions for security and consumer behavior analysis applications," says Sales and Marketing Vice President Joe Harzewski. "Through real-time analysis of video feeds, Vigilant Video puts actionable information in the hands of those who need it and can use it most. Our software sensors are the "eye in the sky" that observe, detect and analyze the things humans do not have the time to observe or identify."

Since January 2004, Vigilant Video has developed products for their key customers - security professionals and law enforcement - that go beyond traditional security systems. With its three products: CamSmartz, CarDetector and LineUp, the company can design a complete security and video mining system for a business.

"CamSmartz is a mainstream commercial security product for general use security surveillance cameras," explains Harzewski. "It is largely used for securing campuses and facilities with a close-circuit television system."

Vigilant's other two products are more specialized. CarDetector is a license plate recognition (LPR) tool used for security gate or parking lot control, or identifying suspect vehicles. "We now have a LPR system available for police vehicles where the recognition is done automatically while the patrol vehicle is moving," said Harzewski. "Car license plates are detected, then matched against a "bad guy hot list". An alarm is set off in the patrol vehicle alerting the officer of a bad guy match. It is automated crime fighting in motion."

The LineUp product works in a similar way but is a facial recognition tool, capturing face shots from a close-circuit television and matching the face shot against similar lists. It is currently used in the casino market, law enforcement and retail for asset protection.

Aside from security functions, Vigilant's products are used also for the purpose of consumer behavior analysis. In particular, Vigilant's applications are used by the retail and casino industry to understand and identify people patterns. Harzewski explains, "Imagine a retail store or a casino full of cameras. Our analytics can map out traffic patterns based on people viewed in the video. This helps the casino/retailer understand where traffic is flowing well, where it is bottlenecking, which slot machines are attracting people (or not), and which products are placed well in a store. Essentially it allows vendors to understand the behavior of their consumers."