Chamberlin Associates' Anne Hoffman: A Straight-Shooter with a Sense of Adventure 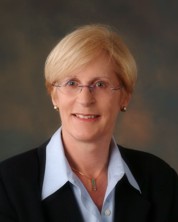 Growing up with three older brothers undoubtedly contributed to the gender-neutral aplomb of Chamberlin & Associates' Anne Hoffman. But the president of the Hacienda-based real estate development firm is quick to add that being the youngest of four children exerted an influence that was just as strong.

"It never occurred to me that I couldn't do what my brothers were doing," she insists. Then she flashes her cool, no-nonsense attitude:"Not to diminish what it might be like for others, but it really helps if you don't dwell on gender discrimination. Just assume it isn't there. It's like when someone is attempting a put-down. If you don't take notice, it doesn't work."

The ability to focus on the task at hand is one of the personal characteristics Hoffman identifies as helpful in a career that has seen dozens of build-to-suit and multi-tenant projects progress from inception through profitable sale. Also on her list of attributes are several other straight-shooting virtues - "common sense, ethical compass, tenacity, objectivity, and the ability to foster effective collaboration" - as befit her serious work.

Hoffman is very sensitive to the responsibilities of a profession that alters the physical landscape in such a highly visible and often permanent way. Development "should be practiced with a high regard for the environment, the neighborhood, and the community," she affirms. Projects can be both appropriate to their surroundings and create economic value, an essential for ensuring the availability of capital in the future. "But when financial gain is the dominant goal and other values are sacrificed, you get ordinary and unsuccessful projects and communities that spurn real estate developers," she warns.

To create the best real estate it takes teamwork and collaboration. Hoffman revels in orchestrating the multiple moving parts of the development process into "a satisfying end result. For me, what's fun about development is the opportunity to put together a talented team of professionals. It's the synergy of the assembled group, challenged to create the best project that still respects budget, meets user needs, and works well for the community. What comes out of the creative tension in an effective collaboration among talented real estate professionals is the solution that best fulfills the goals of all constituents," she enthuses.

Her tenure at Chamberlin's helm, a post she has occupied for the past three years, represents a homecoming of sorts. She originally went to work for principal Steve Chamberlin in the late 1980s, when the office was still part of a Philadelphia-based firm. Instead of joining the owner in a public offering, Chamberlin did an asset swap, retaining the property he had developed in California into a privately held operation. Things hummed along until the downturn of the early 1990s hit. Hoffman greeted the changing market with equanimity. "There were too many of us focused on development to be hanging around when no new development was viable, so I volunteered to explore other horizons," she relates.

She remained in the industry over the next 15 years, most recently with Bedford Property Investors, a REIT based in Lafayette until purchased by LBA Realty in 2006. As Chief Development and Marketing Officer , Hoffman added approximately a million square feet to the Bedford portfolio, which averaged a total of 7,000,000 square feet, when Chamberlin approached her about rejoining his firm as president.

"Bedford was in the winding-down mode leading to its sale, and Steve was looking to refocus on development, so the timing was serendipitous," she says. Moving back in October 2005, she oversaw the sale of about half of Chamberlin's portfolio of 1.1 million square feet while repositioning the organization to return to its roots. "Many of the assets were developed when I was originally with the company," she recalls, noting, "It was interesting to have the full-circle experience of taking these well-performing properties to market after all these years."

The daughter of southern California natives who met at UC Berkeley, Hoffman grew up in Los Altos. At the time her father was chief assistant district attorney for Santa Clara County. In the energetic household of high achievers, "I once thought it would be exciting to build bridges," but she chafed at the constraints of the classroom. In a hurry to get on with her life, she breezed through high school in three years. On graduation she broke with family tradition and jumped full-time into the workforce. "I thrived on real-world experience and opportunities," she remarks.

That spirit of adventure carries over to her leisure-time preferences, which revolve around her love of the water, especially diving and snorkeling. She and her husband - whom she met while sailing-have structured their lives so they can regularly dial down on the Bay Area's treadmill of overstimulation. "Development is a fun, exciting, demanding business," she points out, "but when I take a break, I do it in a very total way."

First, there's the refuge afforded by the waterfront home in Point Richmond that the couple has occupied for the past 20 years. "We are so lucky to have a place on the bay, with a view of both bridges and the city," she comments. An active kayaker and rower, she relishes the ability to "go for a paddle from my back yard."

Their longer-term haven is a house on Mexico's Costa Maya, in the remote, dusty fishing village of Xcalak. Three hours from the nearest grocery store, the village lies within a national park that protects the western hemisphere's largest coral barrier reef. Although the region is an up-and-coming attraction in diving and eco-tourism circles, it is still substantially "off the grid."

The getaway retreat, fronting the Caribbean and bordered by a lagoon in back, is self-sufficient, solar-powered and served by a rainwater-capturing system. A truck selling chickens, eggs, vegetables, and other provisions chugs down the dirt road twice a week, and there's a steady source of fresh fish in town.

Diving is a favorite pastime. Admitting it wasn't easy to learn to dive, Hoffman displays her characteristic level-headedness when she acknowledges that "it has taken some effort to be comfortable underwater. It's not a life-sustaining environment for us humans. I don't frighten easily, but I'm not fearless-that might be foolish. But I do have the ability to measure risk and distinguish what is real from what is not."

Just as quickly, she turns to the flip side: "Being underwater is the closest you can come to being on another planet. It's fascinating and it's fun." And it has that one supreme advantage: "You can't answer cell phones when you're diving. There's no Internet at 60 feet down." Still, Xcalak life is not total isolation. A satellite dish links Hoffman back to the office in Pleasanton - and allows her husband to tune in the occasional baseball game.

When it's time for re-entry, she returns home recharged and ready to approach the next challenges with customary self-assurance, even in unsteady economic times. "The slowdown in development is not as dramatic on the commercial side as it is in the residential environment, but it's going to be a tough few years," Hoffman comments. But then it's not news that the business is cyclical. "The oracles of real estate say that those in the real estate business have a three-year memory in an industry with 10-year economic cycle." With that acceptance, she moves on to the next meeting, a smile on her face. Hoffman works as hard as she plays, and it's clear she has the same kind of fun.