Restoring Lives After the Unexpected is Focus for Farmers Insurance 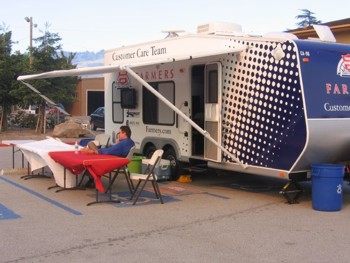 When Farmers Insurance moved into the Carr America Center in Hacienda in May, it brought along a well-deserved reputation for outstanding community service. On March 29 the California Charter Office of Mothers Against Drunk Driving (MADD) presented the Los Angeles-headquartered Farmers with its 2008 California Corporate Citizenship Award. On announcing the honor, the nonprofit made a special reference to the insurer's contributions in both treasure and talent to MADD Bay Area and its mission of "creating safer streets and communities."

A few months later, on June 3, Farmers' agents, district managers, and employees all over the United States observed the March of Dimes' "Be a Hero for Babies Day" by raising a record-breaking total of more than $3.2 million in a series of events and activities held on a single day nationwide.

"This is our 20th year supporting the March of Dimes," comments John Weaver, State Executive Director at Farmers' Hacienda facility. "Here in the Bay Area we raised $240,000 for this year's 'Be a Hero' day. A lot of people put in a lot of effort to publicize the event and solicit donations. We're very proud of this partnership."

Weaver and his fellow employees are also proud of the insurer's reputation in the business arena. Founded in 1928, the Farmers Insurance Group of Companies is today the country's third-largest writer of both private passenger automobile and homeowners insurance, also providing business and life insurance and financial services. With operations in 41 states, its various divisions serve more than 10 million U.S. households, helping customers "restore their lives when the unexpected happens."

Housing approximately 200 employees from 10 different business units, the local office supports the 1,200 agents and district managers representing Farmers in Northern California. During the recent spate of fires, local claims representatives were stationed on site in Monterey and Santa Cruz counties to provide assistance to policy-holders who suffered losses. A key component of this effort is Farmers' Customer Care Vehicle (CCV), essentially a mobile field office that allows the company to operate on the fringes of disaster areas, when and where help is needed most.

"Our CCVs are totally self-contained, complete with electronic equipment so our claims professionals can immediately start assisting any of our displaced customers, including issuing checks on the spot," Weaver explains. The vehicles also function as hospitality centers, serving food and offering phone and Internet access to those affected by disaster. "Major losses are not a one-day deal," he points out. "It's a long process to rebuild. Often, evacuees don't even know if there has been damage to their homes. We're there to answer questions and provide support, delivering on our promise to help you restore life back to normal."

For more information about the company and its full range of services, contact a local agent or visit www.farmers.com .