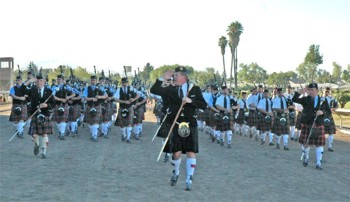 Are you feeling the need to seek entertainment closer to home this summer? The Scottish Games, over Labor Day weekend, offer all the charms of a trip abroad without worries about sky-high plane fares and skittish exchange rates. The 143rd Scottish Highland Gathering and Games open on Saturday, August 30, at 9 a.m. at the Alameda County Fairgrounds, continuing on Sunday until 6 p.m.

With such a broad range of events, it's the perfect place for every member of the family to find amusement. Take, for instance, the gritty athletic competitions-tests of strength, wit, and will. Throwing the caber, "one of the strangest and most ancient games of Bonny Scotland," entails tossing a long, tapered section of tree trunk, the caber, for both distance and style. The Weight for Height also involves throwing, this time with a ball weighing up to 56 pounds-using just one hand. You can also root for your favorite in the world championship Scottish Hammer contest. Measuring 50 inches long and weighing up to 22 pounds, the round metal hammer is hurled with the player facing away from the throwing field.

Music, history, food, and family ties figure prominently in this celebration of Scottish culture. More than 30 pipe bands will play together at the end of each day in front of the grandstand, as will the U.S. Marine Band from San Diego. A mix of traditional and contemporary performers will entertain crowds from eight stages scattered throughout the grounds. Highland dancers, living history reenactments, clan gatherings, traditional food, and other goods from the U.K. all add to the ethnic feel.

Not to be missed is the Birds of Prey exhibit, which offers the chance to see an assortment of federally protected raptors (eagle, falcon, owl, hawk) up close. Guided by licensed handlers-of whom there are only 640 in California and 4,000 nationwide-the birds will take to the air in live demonstrations at 10 a.m., noon, 2 p.m. and 4 p.m. each day.

To satisfy more earthy tastes, wander over to the Amador Pavilion for the Sheep Dog Trials, where highly trained Border Collies demonstrate their skills herding sheep and other farm animals. High-energy youngsters will find plenty of opportunity for hands-on play in the Children's Glen, an area specifically designed to impart "the concepts of Scottish Games: competition and fun," primarily by participating in some decidedly Scottish pastimes: golf, quoits, darts, and bean bag toss. Face-painting, an art corner, and a cultural heritage center round out the offerings targeted at two- to ten-year-olds.

Produced and staffed entirely by volunteers from the Caledonian Club of San Francisco, the two-day event is the oldest of its kind west of the Mississippi, harking back to the first gathering in a vacant lot at 12th and Market streets in San Francisco in 1866, according to club spokesperson Floyd Busby.

A shuttle will run from the Pleasanton/Dublin BART Station to the fairgrounds on both days of the Games. Ticket information, event schedules, and other details are available at www.caledonian.org .