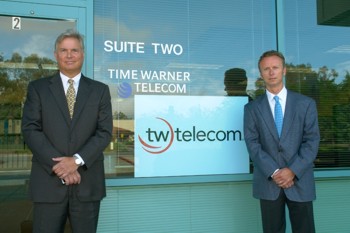 Originally a unit of media giant Time Warner, Time Warner Telecom spun off from its parent company in 1999, becoming listed on the Nasdaq as TWTC. As of July 1, the company became tw telecom in a rebranding that better reflects its independence as well as its heritage. Under this new identity, tw telecom will emphasize and enhance its existing stature as a leading provider of managed voice, Internet, and data networking solutions to the enterprise and carrier markets.

"tw telecom is a leader in directly-connected commercial buildings to a fiber telecom infrastructure," observes Ed Barosky, who was recently hired to direct the regional sales efforts from offices in Hacienda, Walnut Creek, and San Francisco. "This gives us the ability to quickly and seamlessly deliver Ethernet and other next-generation services to businesses that require more efficient network connectivity. That strategy has translated into double-digit growth rates for the company over the past several years."

Barosky concedes that technology and ownership changes in the telecommunications industry over the past several years have led to some confusion in the public mind about what roles various companies play. Unlike data- and cable-providing outfits that focus on the residential sector, the company's target market skips over the area of home entertainment to focus exclusively on facilities-based telecom services to the enterprise and carrier arenas.

Headquartered in Littleton, Colo., tw telecom had more than $1 billion in 2007 revenue. Almost 3,000 employees staff facilities that deliver service to 75 U.S. metropolitan areas in 30 states. Many notable Bay Area organizations are already included in the company's customer base, and Barosky is looking forward to extending the reach, especially locally.

"We have fiber optic cable running underground throughout the Hacienda business area. More than 35 Pleasanton office buildings are currently connected to our fiber network, and many others are within reasonable access. That infrastructure can generate a huge savings a business's voice, data, and Internet expenses," he points out. The fiber optic network is also remarkably robust, with a very high quality of service from T1 to 10 gigabit data connections.

tw telecom will reintroduce itself to the Hacienda business community with an open house from its recently remodeled office and network hub at 4511 Willow Road on July 22 from 3:30 to 5:30 p.m. "We hope Hacienda businesses will come by to tour our network technology hub, review the tw telecom fiber route map of Hacienda, and meet the local management team," says vice president and general manager Dave Ellebrecht. Those interested in attending should contact Barosky at (925) 953-7072. Company information is available at twtelecom.com .