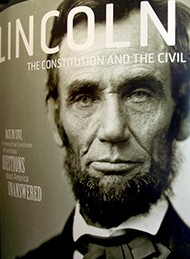 For the past few years the professional staff at Pleasanton's Museum on Main has been "pushing the boundaries a bit," and their work is bearing fruit. Attendance in 2012 will top 16,000 visits, an increase of about 45 percent over last year, notes Executive Director Jim DeMersman.

Enhanced marketing and participation in community events have boosted the Museum's visibility, while new activities like a "wildly successful" monthly pre-school reading program and historically themed Family Days a few times a year are attracting a wider audience.

In growth mode, the Museum has assembled an energetic schedule of events for 2013 that testifies to its broader reach.

The new year kicks off with the first production in the revamped Ed Kinney Series. Formerly in lecture format, the series has morphed into "An Evening With..." type of performance, in which an actor takes on the identity of an historical character and dramatically renders his life. The line-up starts with the comedian George Burns on January 8, with Babe Ruth and P.T. Barnum making appearances later in the year.

DeMersman is especially enthusiastic about the two traveling exhibits the Museum will be hosting. The first, "Singing the Golden State," opening in mid-February, is a display of the sheet music to songs written about California, from 1870s dance hall tunes to 1960s favorites like "California Dreamin'."

"The cover art is spectacular," he comments. "The pieces have been chosen for their amazing visual graphics." The exhibit has been curated by Exhibit Envoy, a statewide nonprofit devoted to creating special exhibits that travel to small and mid-size museums across the country. To add a local dimension, the Museum will supplement the exhibit with a video component and musical instruments from its own collection.

Arriving in June, the second exhibit, "Lincoln: the Constitution and the Civil War," represents a real accomplishment, awarded to the Museum as the result of a national competition. "We are one of only eight sites in California to have this exhibit this year," remarks DeMersman. Assembled by the American Library Association and the Natlonal Constitution Center, the exhibit will travel across the country through 2015, in observance of the sesquicentennial of the Civil War. With the current Lincoln movie sparking renewed interest in the 16th president, combined with the interactive features the Museum will add, DeMersman expects the month-long show to appeal to history fans of all ages.

Three entertaining fundraisers are also on tap: "Wine and Valentines," a four-course dinner at Castlewood Country Club on February 9; a 1950s-vintage Sock Hop on April 27, a new addition; and the fifth annual "Brothels, Bar Rooms and Bandits" Wild West evening on September 14.

The Museum is also reviving an old downtown tradition, the Fireman's Muster, a lively competition among fire units from all over the area. The family-friendly August 17 event will be accompanied by a pancake breakfast, a barbecue, and crowd-pleasing activities like a bucket brigade.

The year's events culminate with the GhostWalk, a 10-year-old Halloween tradition, the last two weekends of October.