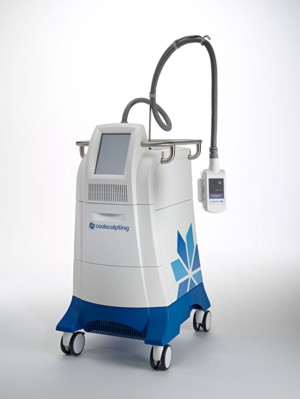 ZELTIQ's CoolSculpting technology been used in over 450,000 treatments to date. (Photo Courtesy of ZELTIQ)

If you have noticed that employees at ZELTIQ tend to have a lean, trim look about them, there is a very reasonable explanation: the company is a pioneer in a non-invasive technique for the reduction of exercise-resistant fat bulges. Marketed as CoolSculpting, the process permanently destroys subcutaneous fat cells in targeted areas by exposing them to extreme cold.

Not surprising with a breakthrough of this caliber, ZELTIQ has become a great success story, and a home-grown one at that. The company was founded in Pleasanton in 2005, moved into Hacienda in 2007, and launched an IPO in October 2011. In between it transitioned from an R&D organization, going live with its first commercial systems, which now total more than 1,200 units deployed worldwide. To date, its equipment has performed over 450,000 treatments - primarily in physicians' offices. Recipients include a number of ZELTIQ executives, board members, and employees, along with physician-practitioners and their staffs. "We think it's important for those involved to be familiar with the patient experience," notes Mark Foley, the company's President and CEO.

Recently, ZELTIQ received FDA clearance for CoolSculpting to treat the abdomen area, "one of the most exercise and diet-resistant problem areas of the body," Foley points out. It also introduced the new CoolCurve+ applicator, with greater anatomical flexibility to treat more body shapes; and a Crystal Rewards Program for top-performing CoolSculpting providers.

Foley, a board member since 2009, took over the top spot on an interim basis this past spring. He was permanently appointed to his post in August. Two months later, ZELTIQ strengthened its management team with the addition of two aesthetic device industry veterans, Chief Technology Officer Len DeBenedictis and Senior Vice President of Worldwide Sales Keith Sullivan. "It is really important to have the right leaders taking us to our next stage," Foley comments.

Future plans include advancing the technology to treat broader areas on the body. "We are investigating next-generation approaches, exploring how we can take what we've learned so far to find different ways to do what we are doing today. We've got a very good R&D organization coming up with different applicator configurations and designs, and we have a good handle on the science of Cryolipolysis. So we are looking at how the changes translate into clinical performance, evaluating different design alternatives and testing them for the level of efficacy and consistency needed for the marketplace."

While elective or self-paid procedures are more subject to current economic conditions, that has not stopped CoolSculpting demand: annual revenue zoomed from roughly $24 million in 2010 to $68 million in 2011. "People have to feel comfortable using discretionary funds," Foley says, but many patients are already spending the money on gyms, trainers, and special foods. No matter how challenging and frequent the work-outs, "we all have areas of fat that are increasingly resistant to diet and exercise, especially the older we get. CoolSculpting is a really nice solution. It is non-invasive, so it's comfortable with minimal downtime. We expect to continue to grow our business." For more information, visit www.coolsculpting.com . .