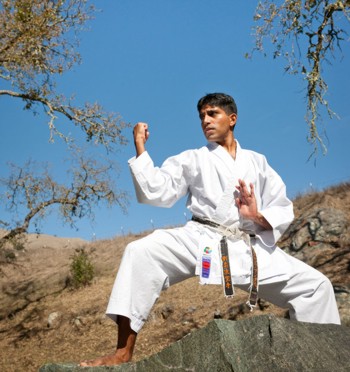 Sanjit Mandal has created a karate program that can benefit even older adults. (Photo courtesy of Tri-Valley Karate)

Goal is for Students to Become Stronger, More Fit, and Refreshed

Karate instructor Sanjit Mandal holds tight to the belief that physical activity is a source, not a consumer, of energy. The business owner and father of two young daughters, who frequently works from home, arrived at this conclusion as a result of direct personal experience.

"My wife has a high-stress job, and she would be so tired coming home from work at the end of the day," he relates. In contrast, Mandal was full of energy. He recognized the same phenomenon in his own karate instructors, who, in their 60s, are almost twice as old as the couple. "They are like Energizer bunnies, ready to go 24/7."

That observation is fueling his latest venture, Tri-Valley Karate, which offers classes in the Goju Ryu Karatedo style at the new ClubOne of Pleasanton, at 5860 W. Las Positas Blvd. "I knew that I could be so active because karate was funneling my energy," he says. Feeling the need to get other adults involved and more active, he created a karate program designed to address the whole body and leave its practitioners stronger, more fit, and refreshed.

Unlike most other sports - running or tennis, for example - traditional karate can be done "forever," he notes. The martial art focuses on the principles of good form, which strengthens the core and extremities and helps to avoid injuries. "But as we get older we lose flexibility, fast. Karate is great for energy, but if you can't touch your toes, you'll be very limited."

Twice a week, Tuesday evening and Saturday morning, Mandal holds 75-minute sessions that integrate karate and flexibility training. The students filing in to his dojo are predominantly adults looking for an avenue to increase their physical activity. Some have studied karate in the past, back before marriage, children, and a demanding job.

The Saturday class is apt to see a sprinkling of youngsters, who accompany their parents during a 35-minute workout and then head off to the club's playcare facility. At that point Mandal delves into the more technical aspects of karate with the adults, who have the satisfaction of knowing they are not just doing something positive for themselves but are setting a good example for their offspring. "When parents lead healthy lives, their children are likely to follow," he comments.

There is much more to be gained from karate than renewed energy. "It is not just about aerobic exercise, strength, endurance, or flexibility." It also serves as training for the spirit, forging a mindset of courtesy and respect that travels well outside the gym. "Karate is a way of life that lets you stay calm and maintain composure in any situation. It has benefits far beyond the dojo."

For more information about the school, the Goju Ryu style of karate, dojo etiquette, and Mandal's experience as an instructor, visit www.trivalleykarate.com .