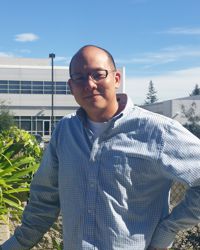 It is exceedingly difficult to worry about work when you are putting all your efforts into safely scaling a multi-story rock climbing wall.

That is exactly why hard-working executive Trace Lee enjoys the challenging sport of indoor rock climbing.

"I like it because when you are climbing, you cannot really think of anything else," Lee said of his favorite sport. "If you think about work, you pretty much just fall down. For me, running or lifting weights is kind of boring. Your mind is still thinking about work. In rock climbing, there are a lot of problems you have to solve, so that's interesting to me. That's a great stress relief."

Lee manages to get to his favorite rock climbing gym in Concord a couple of times a week to exercise and take his mind off business. The 41-year-old founded a successful software consulting business that counts Apple, Disney and ABC among its high-powered clients.

His Hacienda-based company, Trismax, specializes in training compliance software that helps companies manage staffs of any size and ensure everyone keeps up with required training.

"ABC and Disney were our first breakthrough," Lee recalled. "After doing projects with them, then Apple came to us. We were a small company and after 10 years, the small projects became really big projects. Along the way, we also have worked with other companies such as FedEx and Adidas."

While Trismax works with clients around the world, the priority for the Hacienda staff is keeping their largest client happy.

"The team here has the majority of our focus on Apple because that's our biggest contract," he said. "We were really lucky. We pretty much grew with Apple. When we got into Apple, Steve Jobs had just gotten back. The next thing you know, the iPod and iPhone are out, and their business just got bigger. Our project got bigger with them."

Lee, president of Trismax, was born in Taiwan in 1973 to Taiwanese-American parents who had recently returned from America for his father's job as a chemical engineering professor and business owner.

Lee, the youngest of three boys, dabbled in music when he was younger. He was part of a band and even composed music that won local and national awards.

"It was mostly slow pop songs and Chinese pop songs," he said. "It came naturally. A couple of my good friends, we were always making music. We had our own band. A couple of us liked to create our own music."

The young musical ingenue started composing in middle school when he was most active with his band.

"I got a couple of music contracts, but it didn't really get published" he said. "They had the rights to the songs, but you still need to find a singer."

His musical ambitions fell by the wayside as he got older.

"When I decided I was not going to go after (a music career), music stopped flowing into my mind," he said. "Before, I would wake up in the middle of the night and there would be a melody. When I decided no, the melodies stopped. I still play guitar and piano for fun, but other people's songs."

After high school, Lee immigrated to America to pursue his college studies. He landed at Northwestern University in Chicago and roomed with his older brother, a physician at Northwestern.

His studies at the prestigious private school lasted just one semester before he transferred to the renowned engineering school at the University of Wisconsin, Madison.

"Northwestern was too expensive," he said. "I went one semester at Northwestern that could probably pay for two years at Wisconsin. At that time, even out-of-state tuition was not bad at all."

Lee settled into his double major of electrical engineering and computer science, graduating with dual degrees in 1996. He immediately set his sights on the hotbed of technology, Silicon Valley, landing a job as a firmware engineer at Anritsu in Morgan Hill.

He worked in firmware - the software inside of hardware - for two years before deciding he would rather be a consultant at KPMG.

"I realized that I can't really just sit in a cube and do programming," he said with a laugh. "I need to talk to people, and I love business. That's why I decided to go into consulting. I started as a junior consultant and then worked my way up to a project manager."

Lee's two years at KPMG were invaluable for setting the course that would ultimately lead him to start his own company.

"I was customizing software," he said. "I would go in to a company, just like what I do now, to understand what their needs are and propose a solution. When I started, I was on a project team and implementing the solution. As I moved up the ladder, I got to talk to the customer and understand their needs."

"That was the Silicon Valley boom time," he added wistfully. "If you have the knowledge, you can move up the ladder pretty fast, and you can get paid pretty well. It was the good old days."

Lee's talents caught the eye of recruiters with Intershop, who were looking for engineers willing to relocate to Hong Kong and who spoke Chinese. Lee and his girlfriend, Marlene, whom he had met at KPMG, jumped at the opportunity to live abroad.

"We had a really good year, then all of the sudden, the dotcom busted and everything just disappeared within a week or two weeks," he said. "We had a long, steady pipeline (of business) that just disappeared overnight. They froze their budgets, so nobody was doing any projects."

Lee was offered the chance to relocate to Germany, but he and Marlene, who had gotten married in the summer of 2001, opted to move to Taiwan for Lee to start is own business.

"It was always in my heart to be an entrepreneur," he said. "I always wanted to start my own business. I thought that was my opportunity. When they let us go, they gave us a good package. I was still young and that was the best time to do it."

Trismax was launched in late 2001 and kept Lee busy for a full 18 months, but he realized the best chance of growing his business would be if he relocated to the Bay Area. He and his wife also wanted to be near their families - hers in Canada and his in California, where his parents had moved.

Lee and Marlene lived briefly with her family in Canada when their daughter, Madreena, was born. Eventually, the young family moved to Walnut Creek, and Lee rebooted Trismax with renewed vigor.

The company flourished at Lee's home for two years. It expanded to office space in Dublin before ultimately settling in Hacienda five years ago.

"The location is the midpoint between my home and Silicon Valley," he said. "It's a good center point. Most of the clients are still in Silicon Valley."

While Trismax continues to grow and flourish, Lee has his sights set on shifting the company from a consulting firm to one with a few key products to sell to clients. His notion is to take the extensive program his firm has developed and make it available to a broader market.

"At this point, we want to build our training system to be a more well-known company so that when people hear our name, they know we're a software training compliance company," he said.

When Lee is not working or rock climbing, he devotes himself to his family, which includes 12-year-old Madreena and 9-year-old Trevon.

"Outside of work, I'm spending most of my time with my family and the kids' activities," he said.

Lee dreams of a day when he can retire to focus even more time on his family, hone his rock climbing skills and travel the world.

"You're always thinking about your business," he said of the life of a business owner. "It would be nice to take a break. When I exit, I hope to save up some money and be able to do more investment consulting so I'll be helping the younger generation start their own software companies from the lessons I've learned in the last 10 years."