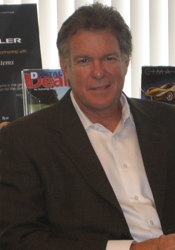 Gary Nixon believes firmly that you get back in life what you give to others.

That basic philosophy has served Nixon well as he worked his way up the corporate ladder and ultimately struck out on his own to start a successful business that caters to car dealerships.

"Ethics are extremely important to me; making sure I take care of my clients and employees," Nixon said from his Hacienda office. "That's really the core of my being. Every time I took care of one of my clients, it always comes back many fold. If you're fair to people and you treat them right, the money will follow. That's been my philosophy."

After decades of working for large corporations, Nixon partnered with a system developer to create CIMA Systems. The company launched in late 2003 as an appointment reminder for car dealerships and has expanded into an expansive communications system between car dealerships and customers.

"We pull the data from (dealerships') in-house systems and automatically communicate in a two-way fashion to the customer based on that data," he explained. "We're the only company that does everything that we do. Our technology is extremely advanced."

Nixon did not set out to be a powerful businessman and entrepreneur. He started with humble roots in Los Angeles, the third child of four born to a professional welder and a homemaker from Switzerland.

He graduated in 1973 from Westchester High School, a west-side school known for such famous graduates as comedian Phil Hartman and Doors manager Danny Sugerman.

"I used to race motorcycles professionally when I was in high school," Nixon said. "I raced motocross. I raced until I was about 18 because I started working, so I couldn't really race anymore. I thought I could go down the racing path or I could go into the business world."

While Nixon enjoyed his high school years, he also had started the work ethic that would guide him throughout his career.

The eager young employee labored full time on the night shift as a hotel bellman. He fortuitously met a young woman who worked nights in the hotel gift shop and days at Volkswagen of America. She encouraged Nixon to apply for a job with the growing automobile company.

"When I graduated, I worked at Volkswagen of America during the day and went to college at night," he recalled. "I went from being in the mail room to moving up to being one of the senior directors over their computer systems. I was very blessed to get promoted a lot. I designed the system that Volkswagen of America had at their dealers that they implemented on a national basis."

Nixon had been taking night classes at West Los Angeles College, the local community college, with plans to transfer to a four-year college to get a degree. But as his career took off, those plans fell by the wayside.

He moved from the mail room to the computer services division and became a trainer, which led to lots of travel around the country. He was eventually recruited to run computer operations for a private VW-Porsche-Audi distributor in the Pacific Northwest. He lived in a Portland suburb for six years, designing a state-of-the-art computer system for the company.

Nixon's work with the privately owned dealership caught the eye of executives at VW, who lured him back to the corporation to institute for all of Volkswagen of America what he had done for the regional dealership. The only catch was that he had to move to VW's corporate headquarters in Detroit.

"I was director over their whole national computer system for all their dealerships," he said.

But Nixon and his wife, Melody, missed living in California. In 1985, they packed up their belongings and 2-year-old daughter, Amber, and moved to Napa. His reputation landed him several prestigious offers, but he ultimately took a job with ADP, the nation's largest payroll company that also has a business that automates auto dealerships.

In 1991, he was put in charge of ADP's major account sales executives from Texas to the West Coast. In 1994, the family - now with son Adam and daughter April - moved to Illinois, where Nixon was ADP's vice president of industry relations and then vice president of business development.

In 1997, the family once again yearned to move back to California. Nixon was fortunate enough to get a plum offer from accounting giant Ernst & Young to oversee sales and marketing for the entire Northwest - California, Oregon, Washington and Utah. The family relocated back to the Bay Area, where the firm was experiencing rapid growth fueled by the dot-com industry.

In just one year, Nixon took the company from a sixth-place ranking to first in the nation and was promoted to the elite partnership level.

Nixon thought he had found his calling and would retire from Ernst & Young - until ADP came knocking once again. They made him an offer he could not refuse as senior vice president of the claims solution group with the promise to be president of the division within a year.

He stayed with the prestigious job at ADP from 2000 until he launched CIMA Systems in late 2003.

"Everybody always wants to own their own business," he said of his reason for striking out on his own.

CIMA Systems counts among its clients hundreds of auto dealerships in the United States and Canada and recently landed its first overseas client in the United Kingdom.

Nixon's competitive streak that has made him so successful in his career also fuels his leisure activities. He plays on a competitive city softball league, a sport he has enjoyed most of his life, and enjoys wakeboarding and bocce ball. He and Melody compete on a Livermore Valley wine bocce league. He also has a beloved Harley-Davidson, thanks to his continued passion for motorcycles.

Nixon has been active in his church for many years, serving as deacon and lead usher and heading up the church's sports ministry.

"I'm a very religious man," he said proudly. "My faith is very important. Ethics is the most important thing to me. My whole life has been taking care of other people. That's how I became so successful. I didn't worry about the money. I worried about taking care of people."

Nixon continues to have a passion for continuously expanding and improving his business, a drive that keeps him going day in and day out.

"I still have a lot of fire, so I'll keep doing it for a while," he said cheerfully. "We'll wait and see. Maybe someone will come along and offer us a boatload of money. But right now, we're having fun, and we're very fortunate."