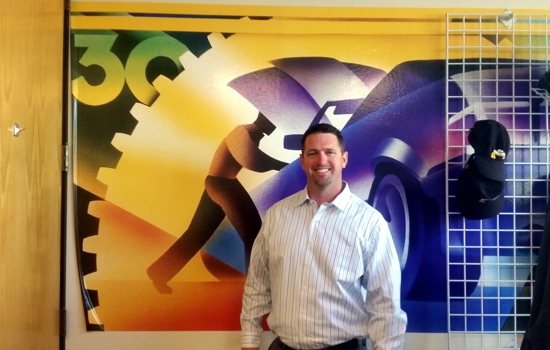 There is not much in life that can be achieved in a mere 15 minutes, but that is exactly what Oil Changers aims to do when customers pull in for a quick oil change.

"If there are no cars in front of you, our goal is to get you out of there in 15 minutes," Eric Frankenberger, president and COO, said. "That's our model. You sit in the car and don't leave your vehicle."

Hacienda-based Oil Changers entered the market at just the right time when founder and CEO Larry Read opened his first location in Hayward in September 1986.

"It was a new idea of the quick oil changes where instead of going to the repair facility and spending additional time, it would be a quick in-and-out service," Frankenberger said. "In the late '70s and early '80s, there were a few people out there doing it. Mr. Read caught onto that idea and we expanded from one location to 34 locations in a 10-year period."

Oil Changers' 34 locations are in San Diego, Fresno and the Bay Area. The bulk of them, 28 total, are in the densely populated Bay Area where busy people value their time.

"I'd like think we're the most convenient and fastest oil change facilities in California," he said. "Most of our locations allow you to stay in your vehicle during the service. We have well-trained staff. Many of them have worked for us for 15, 20, 25 years. It really comes down to our staff and our people."

Oil Changers was initially headquartered in Milpitas, but moved to the more centrally positioned Hacienda location 25 years ago.

Before companies like Oil Changers burst onto the scene, many people took the task of changing oil into their own hands.

"Back in the '70s and '80s, a lot of people were do-it-yourselfers," Frankenberger said. "Honestly, 30 years ago people were dumping their oil in the dirt in their yard."

People eventually became more environmentally aware and the government stepped in to regulate the handling and disposal of used oil, considered a hazardous material.

"We have to make sure it's handled properly and disposed of properly," he said. "It made the way for companies like us to do the environmentally right thing by properly handling and disposing of the hazardous material. It provides a convenience for consumers. Instead of ruining their best shirt by climbing under their car, we can change their oil quickly and get them back onto the road."

The company's multiple Bay Area locations make it convenient for customers to pop in for a quick oil change.

"We provide a lot of locations that are in business areas and also in residential areas where it's most convenient," he said. "Time is very valuable to consumers in the Bay Area. We can really provide an alternative that makes sense for Bay Area consumers."

The company continues to search for opportunities to expand, leaning more toward acquisitions than building new locations.

"Expansion is a big part of our success for the future," Frankenberger said. "The more locations you have, the better presence you can potentially have. We're looking for more growth and success and providing that convenience for consumers."

Learn more about Oil Changers and find locations at oilchangerinc.com .