From Life as a Concert Pianist to Music Academy Proprietor, Pleasanton Native Mark Anderson Works to Create and Foster a Love of Music 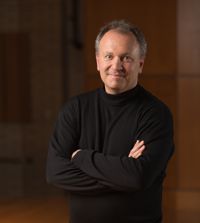 With a resume that includes performances throughout Europe, Japan, and North America and victories in classical piano competitions around the world as well as award winning recordings, it would be easy to think that Mark Anderson, executive director of New World Music Academy, is determined to turn every student that walks through the door into a future professional. While he and his staff are certainly capable of providing the mentorship necessary to reach those heights, their goals are simultaneously more modest and more deeply important.

"Music plays a very profound role, just as part of their development," Anderson says. "We're not trying to make concert pianists, we're not trying to make concert violinists, we're not trying to make people play the flute all over the world. That's not the objective. The objective is to round out their development when it comes to their analytical development, their physical development, their emotional development, and their motor development. Students will benefit tremendously from being exposed to (music). There are so many elements that come into play when it comes to playing a musical instrument that the expansion in a child's mind is just phenomenal, what happens to their brain when they take on music. They pick up a lot along the way whether they are highly successful or not, and we've got a very diverse teaching faculty that can address the needs of just about anybody who walks in the door."

Anderson himself is evidence of the truth of his theory. A Pleasanton native, he first began taking piano lessons at age five. While that might seem like a young age to start, he likens it to that of a professional athlete. "Because of the finely tuned physiological aspect of sports and music, if you're not into this by a certain age, your body has developed past it - the point at which you could jump in is actually gone because your body is formed," he says. "I'll give you a good example. When you go into a grocery store and you see that the checkout clerks are wearing straps around their hands because they've got tendonitis. Why is that happening? It's because they weren't doing that at three years old or five years old. They started doing that in their early 20s and their body is already formed, so those tendons are not used to going through the carpal tunnel. When we're talking about these fine motor or even big motor skills, the skill set is pretty intense and we do it from a very young age, generally."

His career as a pianist grew in large part as he won plaudits in piano competitions, first regionally, then statewide, and finally nationally and internationally.

"It wasn't until I was in college that I started doing more national and international competitions," Anderson says. "I was very lucky to study with a lady named Aiko Onishi at San Jose State. She was one of those real phenomena - she was supposed to be back East at a big conservatory but she ended up settling in San Jose for personal reasons and I was very lucky to find her. I did my undergraduate degree with her and then got a Fulbright and went to England."

His success in piano competitions continued there. His third place finish at the Leeds International Piano Competition caught the attention of Nimbus Records in the U.K., a partnership that exists to this day and has so far accounted for 10 albums. Anderson's latest recording, which was released in March, is his second featuring the work of Julius Rontgen, a pianist and composer who was known as "the Dutch Brahms."

He earned postgraduate degrees from the Royal Northern College of Music in Manchester, England, and the Royal Academy of Music in London, all the time performing in competitions and soaking up the music around him.

"It was a great, great time of life. A lot of it was spent living in the UK and being connected with the London scene, which is extremely vibrant," he says. "The amount of your musical growth is directly proportionate with your musical experience. So if you practice in a cave and live in a cave you're going to play like you practice in a cave and live in a cave. But going to hear world class performers is what creates your palate, the palate that you understand as being sound. When you hear music being made at the highest level, there are colors and textures and balances between voices and things that you don't otherwise hear. That's what was fabulous about living in a place like London. Every successful musician is exposed to a great variety of music making."

He returned to Pleasanton in 1997, setting up a private teaching studio and starting a family and stepping back slightly from life as a performer. "Any opportunity to perform creates a lot of anxiety. You can't settle down, you can't devote time to your family - it's really hard to do," he says. "So the emphasis changed to teaching, which was fine, and my ex-wife (Tamriko Siprashvili) and I were playing two-piano concerts in the area."

In June 2001, he earned a Master of Arts in Multimedia degree from California State University Hayward. The private teaching studio turned into a music school in 2005, which in turn became New World Music Academy in 2009. In addition to his activity at New World Music Academy, in 2012 he became the assistant professor of Piano, Piano Pedagogy, and Chamber Music at the University of British Columbia in Vancouver.

His enthusiasm for teaching is evident as he discusses the thrill of helping a student recognize and grow their musical voice. "They all have something different - I don't think there's any such thing as someone devoid of talent. I just think that it expresses itself in different ways," Anderson says. "I mean, everybody has some kind of innate musicianship but has it been expressed? Has it been mined? Has it been explored? I see that in teaching at university level here at the University of British Columbia, I'll have kids come in 18, 19 years old dramatically different in their abilities, but all musical in some way."

At New World, he is pleased to aid in the growth of the Academy's students, whatever their goals are in music. Classes are offered in piano, jazz piano, voice, guitar and bass, drums, strings, woodwinds, brass, music theory, composing with computers, and songwriting.

"I'm extremely lucky to have such excellent teachers," says Anderson. "I met Markus Pawlik, who is a piano teacher, on the competition circuit back in the late 80s. We met in Israel at the Arthur Rubenstein International Piano Competition. He's one of the best pianists anywhere, and he's teaching at the academy and has been there since 2012. We've got wonderful teachers there and not only in the classical realm. I've got John R. Burr, who's a Grammy nominated piano jazz blues pianist, teaching jazz, blues, improvisation, songwriting... It's fabulous stuff. We've got, of course, guitarists that that will teach you all sorts of styles."

His appreciation extends to his entire staff. "I've got such incredible people working at New World. Kelly Conyers at the front desk is phenomenal - she's been there for eight years and knows the place inside and out. The entire staff is committed to the place and that's kind of what differentiates an integrated music school like that from taking lessons at a music store," he says. "We have recitals where all of our teachers and students come together. We have events where we integrate and we interact as a staff and as teachers and as musicians. I do that when I'm there and I also do that from Vancouver - just calling them, checking in with them, sending them information when I run across something that I find is very informative and is likely to inform their teaching. There's a very great synergy, even from a distance. I think that's an important point."

Anderson is proud of what he and his staff have been able to achieve and what they provide to their students. "It's all evolved into a nice sort of cross-pollination of information and research, with a goal of how to create love of music and how to foster it," he says.

For further information on New World Music Academy, including the upcoming summer session of classes and other events, call (925) 462-5400 or access www.newworldmusicacademy.com .