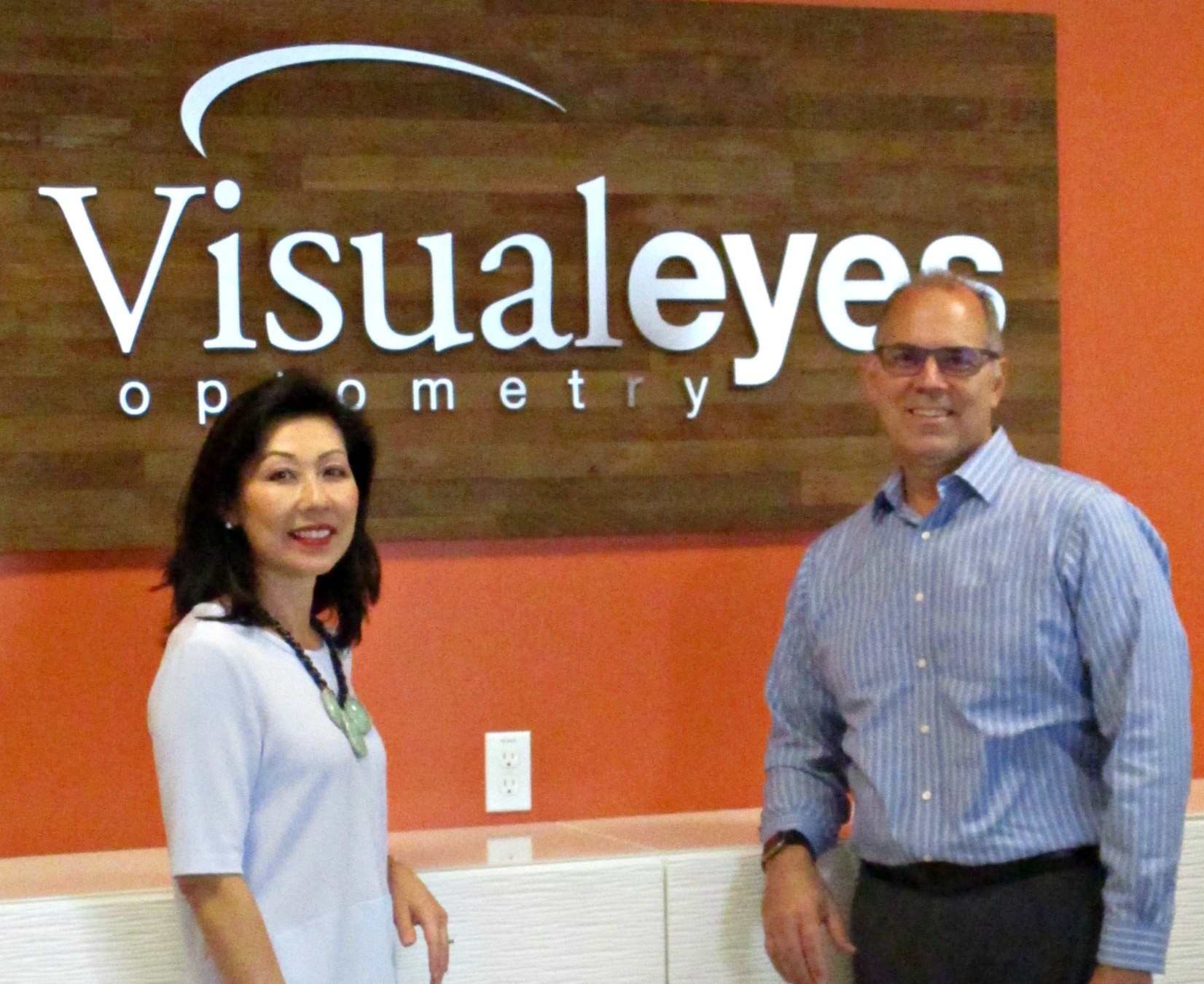 It takes a special talent for business partners to succeed together and the same can be said of marriage. For partners to thrive under both situations is a rare thing, but that is exactly the case for doctors Susan Kim and Edward Laubach, the owners of Hacienda's Visualeyes Optometry.

The pair met at an optometry convention. "I was introduced to her and we kind of brainstormed over different ideas to make our offices better and after a while it blossomed into a different kind of relationship, which was great," he says. The two doctors opened Visualeyes in Pleasanton in 2003.

Each of them experienced a unique path into the profession. Dr. Kim had never visited an optometrist until she started college at UC Davis, where she had her first eye exam. "It was a very, very small correction but I didn't realize that I couldn't see the detail, such as leaves on the trees from a distance, until I actually received my glasses," she says. "I thought it was really kind of interesting - the ability to see so clearly, almost instantaneously with some optical aids was fascinating to me. And the dramatic change they made in my life! I started looking more into it and worked for an optometrist while I was still in college, and eventually I went in that direction." She received her doctorate of optometry from the State University of New York in 1992 and, as a developmental optometrist, serves as an active member of the College of Optometrist in Vision Development with an emphasis in children's vision. She is also board certified in Vision Therapy and Visual Rehabilitation (FCOVD), as well as TPA certified and trained for Therapeutic Management of Ocular Diseases.

As for Dr. Laubach, a native of Orange County, he began college at Cal State Fullerton as a computer science major before he recognized that he "was much better with people than machines." Once that realization sunk in, he says, "I knew I wanted to be a health professional. I wanted to do something where I could benefit people and I thought there would be a good future in optometry." He graduated from Fullerton with a degree in biology and chemistry in 1986 before earning his doctorate of optometry in 1991 at the Southern California College of Optometry. Dr. Laubach is also TPA certified and thoroughly trained for Therapeutic Management of Ocular Diseases. He opened his first practice in Milpitas in 1994.

Part of what makes the couple's business partnership work - aside from the fact that, as Dr. Laubach puts it, "we like each other" - is that they each have different, but complementary, schedules.

"She specializes in pediatrics and in vision therapy," he says. "I specialize in the contact lens realm, in an area called CRT for corneal refractive therapy."

Dr. Kim explains her vision therapy practice. "Basically, about 20 percent of kids have a visual functional problem that gets undiagnosed because most of these kids also have 20/20 vision, so it's not an eye sight problem but it's more of a functional problem," she says. "They may have delays in reading and tracking or focusing or eye-teaming abilities which can sometimes be masked as ADD or other diagnoses. Those are some of the things that we can certainly diagnose and detect, and if we do find there is a functional problem that is something that we can help train and/or eliminate."

The approach allows Dr. Kim to go beyond observing how the eyes focus light to identifying weaknesses in the overall visual system. "Looking for 20/20 vision is really just checking the physical aspects of how the lenses refract, just that the acuity aspect of it," she says. Looking at the dynamics of the system as a whole allows her to observe "how their eyes are teaming together, how they're working, how they're focusing - all of those things."

A number of problems can arise, for example, if the eyes don't converge properly - a condition known as convergence insufficiency or CI. "It is one of the most common causes of eyestrain, double vision, and fatigue. It translates into words moving around on a page," she says. "The kid can have headaches or blurry vision, they may start to skip words when they read, there's decreased comprehension... Parents often think, gosh, this kid has got ADHD or dyslexia, and if the doctor is not prone to checking for these types of problems, they may just say your vision is fine, you don't need glasses. It's unfortunate that some of these kids can get misdiagnosed or not diagnosed at all."

The answer to conditions like CI is similar to the way in which athletes recover from injuries. "It's kind of like when you go skiing and mess up your knee, you go through physical therapy to make that better," Dr. Laubach says. "There are different things with vision that we can enhance. We can improve the tracking, the fixation, the focus, the depth perception, the binocularity and so forth - the whole performance of the visual system so it works better together as one."

Dr. Kim continues. "Basically what happens is we work with a visual system and stabilize that. Once that visual system is stable and consistent, then the image that the brain takes in, the visual intake of information, is a lot more stable, so then they can go ahead and process information a lot more efficiently. A lot of that eyestrain is eliminated, whether we are working with a child or, for example, an adult with computer eyestrain."

"The goal of vision therapy is really to build up the visual skills, to develop and to reduce any kind of visual stress," says Dr. Laubach.

As for his specialty, corneal refractive therapy or CRT, it uses special contact lenses to reshape the eye at night. "It kind of works like Lasik, with some important differences," he says. "With the Lasik surgery, the laser reshapes the eye so a person doesn't need glasses or contacts. The CRT contact is the same thing - it reshapes the eye. You put in it at night, it reshapes the eye, and then you take it out during the daytime. You don't need any daytime glasses or daytime contacts. You're able to see nice and clear without slicing and dicing the eye."

Approved by the FDA in 2002, this type of therapy is another example of how optometry has changed over recent decades. "The technology is getting better and better every year," says Dr. Laubach. "For example, they had retinal cameras that we could use to take a picture straight back inside the eye. Now, they just came up with a pan-retinal camera that can not only take you straight back but to 270 degrees inside the eye, pan-retinal. We don't need to dilate as much because we can see everything inside the eye with some of that technology. We also have a new wavefront aberrometer that actually measures the prescription automatically, and that wasn't available even several years ago. I think as the technology gets better and better, we're able to better serve our patients."

For two people who set out to make a difference in people's lives, it sounds like they have been able to do just that and more.

To access additional information on Visualeyes Optometry, see the web site at veoptometry.com.